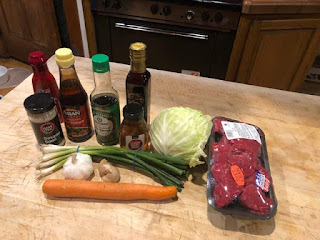 Fuck. When's the last time you saw one of these? (sorry for the language.)

Truth is, I haven't been trying much new. We have a set of standards and after a long day at work for both of us, we will go for the tried and true.  But, in the last month, I received an 'air fryer'.....whatever that is.

I mean, I know what and why it is, but I'm not 100% sure I see the use. Cooking might be "healthier", but it doesn't look like it will save any time and potentially, clean up could be messier and take longer, since one now has a big honking piece of machinery that now needs storage too.

That said, for the holidays, 710 gave me a America's Test Kitchen recipe book for air fryers. I mean, Julia and Bridget wouldn't steer me wrong - would they?

I'm not sure they did, but we have some work to do.

Out of the recipe book, I chose to make Korean Beef Tips (pssssst.........not made from real Koreans) and Korean slaw. 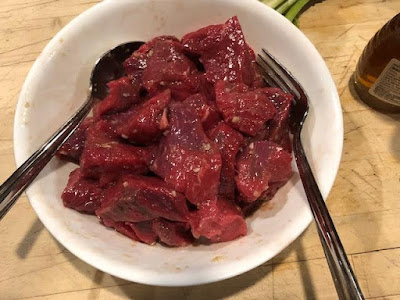 Combine 1t of ginger and 1T of sesame oil, garlic, soy and gochujang sauce in a large bowl. Microwave for 30 seconds, stirring halfway through.  Add the meat to the bowl and toss / coat.

....and let me tell you, it takes for-fucking-ever to grate a teaspoon of ginger, let alone two. 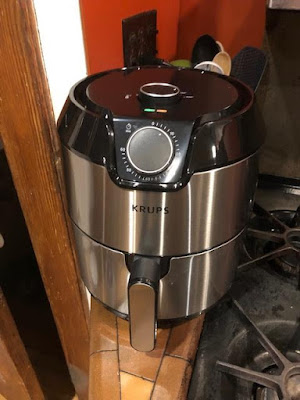 Place meat onto tray of air fryer and cook on 400 (apparently no pre-heating) for 13-18 minutes. Turn meat halfway through. 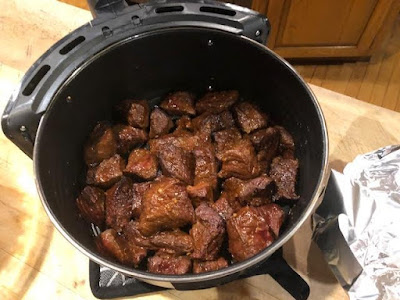 This is what it looked like, which browned nicely. I cut into one piece and we ended up with at least another 8 minutes of cooking time and even some of the bigger pieces still were rare. 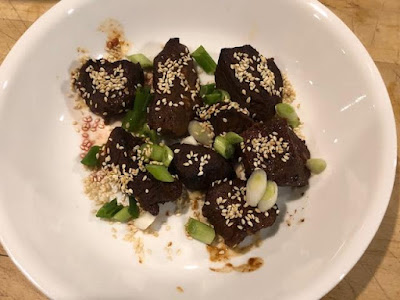 Final product. Added some toasted sesame seeds and scallions.  The Korean chili paste wasn't really that hot at all. It added nice spice, but there are others products I might use instead the next time.

I liked it more than 710, but to be fair, he ended up with the rare pieces, which did not thrill him.

It was a decent first outing, so maybe the next ones will be a bit more successful.

It's a vinegar slaw, no mayonnaise base or anything.  This takes no time at all either.

For the dressing combine the vinegar, soy, honey and ginger. Whisk together. Add the slaw and carrot into the bowl and toss.  After sitting five minutes, add rest of the sesame seeds.

It had ok flavour, but we ended up not only adding pepper, but some of the left over scallions. The ginger helps as well, I'm not a huge fan of it, but it added some zing for sure.


We will see what this contraption brings. More on if it
Posted by Blobby at 12:08 AM

I've found grated ginger in a jar at the Asian store. It helps when you really don't want to grate fresh.

is it an air fryer or an "instant pot"? I don't have either. but one of my friends does:
https://ravager619.wordpress.com/2019/01/20/pork-ribs-steamed-asparagus

I've seen several brands demonstrated on QVC with the selling points being a healthier and faster way to cook. I've held off because I don't want to take up much needed counter space and couldn't you achieve the same results with your convection oven?

After you've become more familiar and experienced with this appliance, I hope you write another post as to what you think of it.

The way I figure it, with the produce regulations sorta flying out the window, it doesn't matter how I eat. I'll stick with the same old unhealthy way I've eaten for years. Long live hot wings (my wings call for dredging in flour, then frying and dropping into a hot sauce mixture)! By the way, you lost me with ginger. I love it in candy form but not in sauces or pies or anything else except snaps.

You are using your Microplane to grate the ginger , right? Shouldn't take that long...