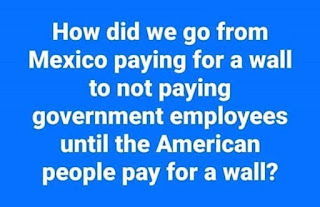 I am avoiding as much news as possible.  Even if I weren't so much of it is rehash.  Nothing new under the sun.

While I feel for the workers not getting paid, I'm ok with the Dems holding out for the long haul. At some point, someone has to lose - let it be BLOTUS.

I'm not even ok with the negotiating down to an "acceptable" amount.  The number should be $0.

Whether true or not, I "heard" that the IRS cannot process refunds due to the shutdown. Huh? Just refunds? I would think there wouldn't and shouldn't be anyone to process tax filings.  And tick tock - April 15th is just around the corner. I'm thinking these BLOTUS supporters would be furious if they don't get their refund - but then I realized that his rich followers probably don't pay taxes, and his common folk followers don't have income, so......maybe it's not that big of deal for them.

Nancy Pelosi ?   Meh - who the fuck cares?  I never thought she was all that during her last go-round. I certainly think she brings nothing new to the table. And while no one can do worse than Paul Ryan, I'm not even sure Pelosi can unify the house democrats, let alone sway the republicans.

Save your PAC funds. Save your PAC. You're not getting the nomination, let alone the win. I've thrown this out here before, but Warren is nothing but talk. Everyone thinks she such a straight shooter and she really is not. She'll kind of ask pointed questions and then usually misses the mark on all the follow-ups. And I see zero legislation that she's winning or leading. I'm all for a female president, but not her.

...and I'm sorry, but that Native American DNA stunt was just lame.

BLOTUS changing the narrative on "essentially firing" General Mattis........the guy who wrote a very public resignation letter. One that BLOTUS didn't even read......allegedly. He praised Mattis.....at first. Then one of his peeps, said the resignation wasn't a glowing reflection of the man or his administration.

Yes, news picked up the story for a nano-second. Here is why it's important. It's one of the 1000 lies he's told - right along with the military raises. People are believing this plate of horse shit he's feeding them. It's not enough to tell people in a 23 second Lester Holt blip that this happened - show BLOTUS saying it and cut to the letter itself.  CALL. HIM. OUT. on it. All of it.  Continually.

two years of this orange shitstain's shitshow and I am fucking sick and tired of it all! arrest the bastard for treason already!

Four days! I wish I had your self-control.