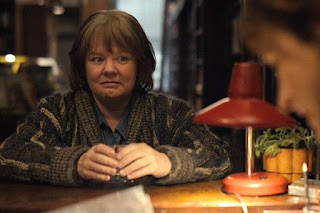 Our final movie for 2018 turned out to be Can You Ever Forgive Me?.

This is a film we saw previews for a year ago! It took 11 more months for it to be released. I'd say I wondered if it would ever come out, but in reality forgot it existed.

As it was, the movie was playing at one theater, and at one showing per day. I'm surprised it lasted long enough for us to get to it.  Oddly enough, there wasn't a seat to be had in the house.

My first thought was: Melissa McCarthy in a dramatic-like role = Oscar baiting.  I believe this is why the delay in release - closer to award season time.

It's not quite as bad as the grab Steve Carell is trying in a Robert Zemekis film (i.e. bomb), but it seemed evident.

Also, McCarthy wasn't the first choice for the lead. Julianne Moore dropped out and was replaced.

That said, McCarthy does fine in this role. There is enough straight acting with enough light heartedness that it plays in her wheelhouse.

The story is based on Lee Israel and her true tale of trying to make ends meet scheme.

The premise was interesting and the extent of her activities are barely touched upon here, but it is fairly well executed in writing and directing.

The acting is good. There are no surprises from Grant or McCarthy, for that matter, and it's always nice to see Jane Curtain in something.

If McCarthy gets an Oscar nod, it will be for genre changing, not ability.  She is good, for sure, but it's not a groundbreaking performance just because you juxtapose a previous role of having her taking a dump in a sink.

While l liked the Can You Ever Forgive Me?, I don't think you need to rush out to see it. Netflix or HBO will suffice.

I'd not heard of this one, though I see it's released here next month. My interest would have been greater if Julianne Moore had stayed with it. To see? Possibly.

Curiously this is currently playing at our local art house theatre. As you suggested, I'll wait until HBO or Netflix offers it.