the Show Must Go On 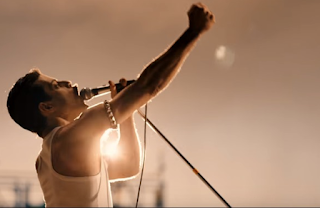 We saw more documentary films than ever before in a theater and loved/hated Three Identical Strangers.

I was disappointed with the Incredibles 2 - but maybe other viewings will change that.

Raybeard's movies and mine did not overlap this year. Some I believe had to do with release dates between here and the UK - and a number to which we never got (KkKlansman, Boy Erased, the Miseducation of Cameron Post, Deadpool 2 (whom my friend, Arnie says is better than the original), and a Wrinkle in Time (I kid. Neither I, or apparently anyone else, wanted to see that!)).

One movie in 2018 we did not see until this last Saturday (yes, I'm behind in posting), was Bohemian Rhapsody.

The last My Music Monday post wasn't an accident, ya know.

I wanted to see it more than 710, but he agreed to accompany me. It was only still playing at two theater's in town and for one showing per day. I honestly thought we'd be the ONLY people in the theater as I assumed anyone who wanted to see this already had - how wrong I was. The place had a very decent sized crowd for a movie that has been out of 2+ months.

We were almost the youngest!  I was so surprised to see the 70 (and older?) set there. But you know, Queen released their first album 46 years ago too. These folks could have been in their 20s then. Of course, I'm still in denial that radio plays 80s music on "oldies" channels.

When the film first came out, Morty mention it was good, even though it had some historical inaccuracies. And he was right - on both counts. The movie is good, even if the songs aren't always chronologically correct.  Maybe others wouldn't notice that kind of thing - but Morty and I are not "others" when it comes to music and release dates.

Rami Malek did a fine - if not an eerie - job as Freddie Mercury. As you'd expect, he carries the movie. Some of the mannerisms were just creepy - down to the way he held his mouth and smoked. I kept invoking every parent ever thinking, "your face is going to freeze that way".

It's not an end-all / be-all movie, but it can't possibly be. It's more than little sanitized - and not just about Mercury's sexuality (though that is way cleaned-up too).  While I like(d) Queen, it is doubtful a band can be on such an agreeable level about so many thing so much of the time.  Still, you're not going to please everyone.

I get that Mike Myers, as a record exec, is a nod to his re-re-re-introducing the song "Bohemian Rhapsody" to the U.S. market with the movie Wayne's World. Still.........I wasn't impressed.  And I had to endure MTV playing "Bohemian Rhapsody" for an entire summer, every 7th song. That actually made me loathe the song for two decades.

I thought Tom Branson Allen Leech did a better job being the creepy assistant agent. Honestly, he bared no resemblance to the guy you see on Downton Abbey.

There are allusions to Mercury's sexual proclivities, but nothing overt. The wearing of the silk robes is more disturbing than guy-on-guy action.

Malek does - and doesn't do - his own singing. As you'd expect, it's lip-synched from recorded music, but only some of the vocals are his and some are from someone else, then blended together. Still Mercury looms large...and how could he not.

While I always liked the music of Queen, it was nice to have another glimpse into that those tunes. I laughed and laughed at references to Roger Taylor's "I'm in Love With My Car", because my 12 year old reaction was the same one the band had when deciding to record or add the song to the 1975 album, Night at the Opera.

Still to hear songs like "Don't Stop Me Now", "Who Wants to Live Forever?"  and "Hammer to Fall" was great.

I was hoping for more of a Purple Rain moment. The story was going to be the story, but I wanted incredible live performance shots. Those only truly came at the Live Aid event.

I liked the movie a lot and more importantly, 710 who was on the fence, was glad we went.

Thanks for your mention of my blog yet again, B.

I was underwhelmed by 'Call Me.....'. Not that it was in any way 'bad'. Just thought it wasn't as special as a lot have made out.
Purposely didn't see 'Isle of Dogs' 'cos of.....you know, animals - even when they're animations. Pushes too many uncomfortable emotional buttons for me.
Never heard of 'Cakemaker' which, I now see, is not scheduled for a U.K. theatrical release, and is unlikely to get one now, being a 2017 film.

I'm with you for most of your 'Bo. Rhapsody' remarks. The film was playing more than a mite too safe with Mercury's life - just unsubtle hints here and there, getting us to fill in the gaps as if they were too risky to be truthfully depicted.
When I saw the film I hadn't realised that much (most?) of Malik's 'singing' was actually mouthing to Freddy's (or someone else's) voice, making me think at the time what an extraordinary impression he was doing. A bit disappointing, then, to discover later what was really happening. Still, the film could have been much, much worse than it was, and you really have to hand it to Malik for pulling off his uncannily credible impersonation of Saint Freddy.