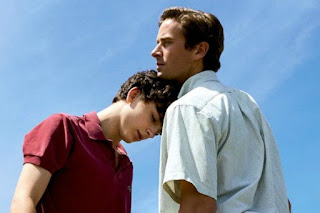 Call Me By Your Name finally arrived in Cleveburgh. It is just one of those movies I've been jonesing to see.

No, I didn't read a review, the book, or even any press about it. I like to be surprised at movies. As luck would have it, our friends David & James were able to join us.  David forewarned that he was still spontaneously broke into tears now and again.

As you might have read, both David and James have lost a parent in the last 3-4 weeks. I offered to change the movie to go see Bad Dads 2, but David was pretty emphatic that we not see that one.  Bullet dodged.

....and btw.....who the fuck ever thought to hire Mel Gibson for a movie ever again? I can only imagine two scenarios:  Mel has something over the producers of the film or he's the only one who would agree to play Will Ferrell's father.   Anyway.....on with the Call Me post.

To be honest, I don't know even how to get into this movie without spoiling anything. I found it to be beautifully shot, well paced, as it did build - for as much as a movie like this can. The story we well written and told, if not at time ambiguous.

I thought Armie Hammer did a great job as a visiting graduate student to a host family in Northern Italy. Timothée Chalamet does an admirable job as a teen struggling to find his sexual identity. I think that is was the ambiguity to which I referred comes in. While the dialouge can be quite captivating, sometimes I had a difficult time who they connected point A to point B.  But parts of it you can chalk up to being a teen and in a difficult time in your life - that things won't flow so easily or as planned.

I don't take too much stock into a man / boy situation. Elio (Chalamet) is 17. Oliver (Hammer) is a grad student - so maybe supposed to be mid-20s. It's not that big of an age difference and let's face it, who hasn't  been 17 and in lust / love / admiration of an older, more experienced man?

The reality of the somewhat clumsy relationship might have looked strange from the theater seats, but was probably more realistic than anyone cares to recall or wants to see.

The Italian setting was perfect. I felt you really immersed yourself into how it would be in summer at a home like this.  The house, the town, the bikes, all local colour that fits well with the area, though one brief scene of Elio picking a peach off a tree was a little biblically heavy.

As much as I enjoyed the progression, when it comes to gay movies, I always wring my hands at the prospect of fear of outing, bashing, ostracization, bullying....or all of the above. It seems standard fare for it this genre.

What I semi-counted on early-on was Elio's parents. Worldly and intellectuals, they seemed supportive of their son and his pursuits. When some things were encouraged (to a degree) and discussed, that did not change. A conversation with his father was so poignant to me, it totally made the movie. Elio's father's line: "nature has cunning ways of finding our weakest spot", just dug at me.

There was the way it ended and the way it ended was unsatisfying and great. The story might not go the way you want it, but the final long shot of Elio is marvelous, though I'm thinking many other than the four of us might think so.

I truly enjoyed the film. It's gotten raves I know, but not enough to get more than a dozen and a half folks into theater seats in this mid-west city.  Mind you, we did not see it at the 'art house' theater, but the big cinaplex. So many it won't play that setting.

One thing I can tell you:  you'll never eat a peach the same way again.


Song by: the Psychedelic Furs
Posted by Blobby at 12:06 AM

Hmmmmmm. Pleased that you liked it, but seems I'm in a minority of almost one in failing to be so entranced by it. It's fair to say that I was, to a degree, impressed, but really not that much. It's already blurring in my mind.

Assuming that you hadn't read my thoughts beforehand:-

I read your thoughts afterwards. I really did avoid reviews - paper, verbal and blog - beforehand. I totally appreciate your take, mine was just a tad different.

This is one of those wait until it comes to On Demand, or better yet, HBO, movies for me. I enjoy quiet movies in the silence of my home.

Yes, I knew your dictum re reading reviews before seeing, B. As to this film, I'm now asking self "Why not me?".

I eat peaches out of a tin in syrup?

You’ll be fine - just close your eyes and use your imagination...