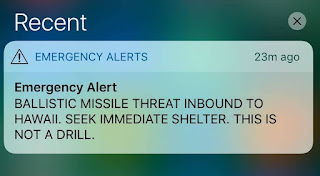 So, we came out of the Opera movie and sat down to have lunch out - which is a real treat. Usually, we high-tail it back home to be with Shep, but we are trying to reclaim "us" time.  Who knows if that will pan out.

So while 710 goes to use the little boy's room, I check my mobile Facebook only to come upon this blog title image in my friend Glenn's news feed.

It was disconcerting, to say the least.

Now, I was a little stunned, naturally, as I read the announcement before I read his posting, so I thought this was a real thing. As we all know by now..........it wasn't.  I just didn't read further in his posting (though later I made a War Games reference in his comments).

Operationally, this alert system was doomed to fail on so many levels. Forget the fact that to sign into my banking site that I need a password and to answer at least two security questions. But hey - that's only $$$.

I could yak about BLOTUS just playing golf through the entire thing, but did you expect anything else out of the douchenozzle?   (the answer you're looking for is: no.)

My friends Morty and Meredity clearly have read about all of this more than I. The tales of people saying their goodbyes and the associated heartbreak. I saw none of that.

I'm crass I know, but I kind of chuckled at the people running..............to safety.  On an island. Thousands of miles from any land mass. With alleged nuclear warheads headed right toward them.

Clearly, none of these folks saw the Day After, or read anything on Hiroshima, or saw Indiana Jones and the Kingdom of the Crystal Skull (but you can't blame them for that last one!).

I suppose there is a survival instinct that kicks in, but putting yourself in your bathroom, unless it's lead-lined, seems like delaying the inevitable.........by .0000021 seconds.  And now you have to do it crammed into a place where the last thing you see is the ring around the tub you kept meaning to clean, but hadn't gotten around to.

I say that of course, until it comes to 710, Shep and Sophie.  I'd probably want to keep them safe, but if not, I want to be with them in the end.

Email ThisBlogThis!Share to TwitterShare to FacebookShare to Pinterest
Labels: Fuck Up, News, War

I’m finally crawling out from under my rock of illness. That day I was flying. I checked news feeds the took off from Houston to San Diego. First thing I saw when I landed in San Diego was a notice about the incident in Hawaii. Unsettling to say the least. “Oh wow here I am in the air aboard an Airbus A320 with 140 others I don’t know, we are still alive watching the world blow up beneath us and we no longer have a place to land.” Nice thought huh? Glad that plane didn’t have direct TV.