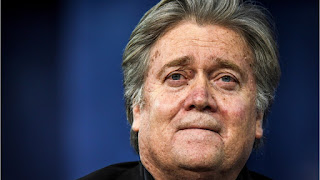 I gotta tell you, sitting down to write any political post is soul-draining.  Just the idea of it. The execution is just as difficult, if not more so.

In what fucking world is Steve Bannon a white knight. Oddly enough I don't mean the Ku Klux Klan kind of white.

....and maybe it's more off-white. Eggshell or ecru.

All alleged quotes in a new book by Michael Wolff, Bannon goes on to detail a meeting he basically calls 'treasonous'.

"The three senior guys in the campaign (Trump Jr, Kushner, Manafort) thought it was a good idea to meet with a foreign government inside Trump Tower in the conference room on the 25th floor -- with no lawyers. They didn't have any lawyers," Bannon continued, according to the Guardian. "Even if you thought that this was not treasonous, or unpatriotic, or bad shit, and I happen to think it's all of that, you should have called the FBI immediately."

Ok - first he calls out those three, who even by his standards are imbeciles. And let's face it, if Bannon thinks it's a bad idea, you've really had to cross some kind of line. But that he'd even think to call the FBI - an organization I'd assume for which he'd have no respect - simply makes me look at that bloated gas-bag just slightly different.

"Steve Bannon has nothing to do with me or my Presidency. When he was fired, he not only lost his job, he lost his mind."

He then goes on about Bannon not being part of the election victory......blah x3.

The telling part of this? Not once does BLOTUS deny this (at least yet). Not once does he call Wolff's book a bunch of bullshit or even complete work of fiction.....or Fake News.

Nor do I hear Bannon say he was misquoted or that it was all made up (at least yet).

Of course, I don't know if BLOTUS really cares what anyone writes about him.......as long as they are writing about him.

Is there a bigger word in existence for 'megalomaniac', other than the word itself?


And then there are more distractions from Manafort himself. The charges and targets are ridiculous, but a distraction is a distraction. And he and BLOTUS are laying the groundwork for an FBI and Justice Dept in need of overhaul as he thinks they are clearly biased. I have to give it to them, they're good.  It's just the end game. The soon to be totalitarianism of it all.

The average 'Murican is stupid. There is enough distrust on all sides that I can easily see Mueller's work getting derailed.

....and this folks, is why I shouldn't write political posts later in the evening.....and why my anxiety will keep me up at night.   Again.

Song by: Lindsey Buckingham
Posted by Blobby at 12:07 AM

I’ve already ordered my copy. Juicy toilet reading, scare the S*-t right out of me. It’s 30%off pre-order on Amazon and is already #1 on all the best selling lists.