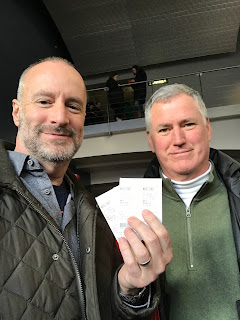 In life, there are winners and losers.

When it comes to my life with Mike, I'm a loser.  ....most of the time. He's a winner - like when he got to spend an evening with me last July.

HUGE win!  That I paid for everything and brought cupcakes did not hurt matters.

The cupcakes were payment for my loss at last year's 6th Annual Academy Award Guessing Game®.

I lost at this year's Emmy go-round too. Mike said no payment necessary and that we'd make the next contest double or nothing.

Well, as you saw a week or so ago......I lost again. Double it was. But I alluded to that we'd think about something other than sweets as the prize. The idea was to send him to see Three Billboards Outside Ebbing, Missouri.

I sent Mike a message reminding him to send me a theater, date and time. He nicely responded if they could change the movie selection. While he did want to see Three Billboards, eventually, they would like to go see Call Me By Your Name.

In a matter of minutes, the tickets were purchased and the code was sent to his phone, so he could pick them up at the movie kiosk.  I almost...........almost.........just bought senior tickets. And where I could make a joke on his age - as he's 7 months older than myself - that wasn't the reason. They're cheaper. And I'm nothing if not cheap.

On the off-off-off-off chance that someone would card him {snort!}, I didn't do it. He's not a senior.....yet. I cannot vouch for Peter.

Apparently, it all went off without a hitch. Peter said the theater was crow-ded! Everyone clarmouring for tickets and they just pranced in and took their seats.

I might have been the one to select the verb.  It's quite possible they minced. You just never know.

I asked for no spoilers, but then we had this exchange......


But at least I'm all paid-up.

Song by: Michael Penn
Posted by Blobby at 12:02 AM

Make sure he still sees 'Billboards'. A more intense and satisfying cinematic experience by far than 'Call Me', in my view. I'm sure many others might disagree but I'm sticking to it!