Somebody Make Me Laugh 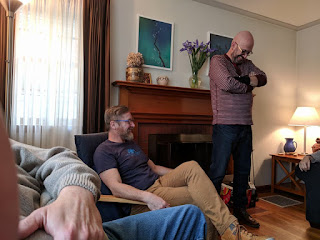 I've said it before - I love my friends.

We never see each other enough. I "ran into" Morty at the Orlando airport last month.  It was great fun catching up over Dunkin Doughnuts while TSA surrounded the luggage that I left there after I paid and just walked away with out.

Still, we had a good chat before we caught our respective planes.

And I met up with Rebecca and her husband (and in-laws and one daughter, and her father) about two weeks ago. That was a nice time too. Uncomplicated conversation and lots of jokes. Not like, "what's up with airline food....." jokes. We're better than that.

This last Sunday, I headed to Columbus to surprise Meredity for her b-day. Her....boyfriend (?)....arranged a brunch for her. The question mark comes from, can you (or should you) call the man with which you live a "boyfriend" when you're and adult. "Partner" seems.......well.......gay.

Anyhoo, about a dozen folks were there to greet her. I think she was legitimately and pleasantly surprised. It was low key, and most people knew each other, or of each other. When I introduced myself - by my real name, the comeback was, "are you Blobby?".      <insert>eye roll emjoi</insert>.
(that's my fake html).

My fame precedes me, apparently.

The core group was there, save Jon. He was missed. Sam - a very welcome blast from the past - was there. I hadn't seen him for almost three years, so I was glad that someone invited him. I didn't get involved in planning at all, to the point that we couldn't even get Shep boarded somewhere, so 710 could not join - something he was sad about, as he loves Meredity.

We are "adults" now, so we discussed media, politics (and the combination). Sam, like me, has stopped watching and listening to the news, NPR included. But it's a fine line, we discussed about being uninformed which is what the current administration wants.

Harry Potter was mentioned: mainly Ron Weasley....and that except for a game of Wizard's Chest did he really do anything in the entire series. Save for speaking parseltongue in the last movie to get into the chamber of secrets, the answer is 'no'.

But we also talked about the women's march, the #metoo stuff, Aziz Ansari especially. Let's just say it was lively, as everyone might not have been on the same page. ....and there was a lot of 'what you watching on Netflix...'....because we're old.  It seems everyone - save me - are into the psychological twisted shows. But I was instructed by Morty to watch a few different shows. So they are in the queue.

That's the thing about my friends, they make me laugh. I mean really laugh. Often at my expense, but I set myself up, for sure.

Take the blog image. Ditto captured that. I didn't even know she was taking pictures, which probably worked in my favour. I'm not a fan of pics I'm in and I just love this one. It's a real moment. I know I was laughing at something Sam said / did to me. He bested me.

The day was all too quick. I have rarely ever come down and back in just a day. I was tarred when I got home......and I hadn't had a thing to drink that wasn't sparkling water!  Unheard of with this group. I wouldn't have changed a thing though. It was a great day.

You are very fortunate to have each other.