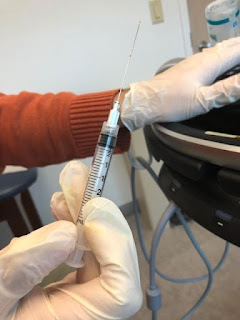 I made it all of 23 days into the year before seeing a doctor for something non-work related.

I think you know I've been in physical therapy since October for a shoulder impingement. With my fall, and getting a bad cold, PT came and went. It helped, but it didn't truly make the shoulder better.

Honestly, as much as my shoulder hurt, I was just kind of semi-dealing with it. I've found ways to dress that were slightly less painful. I've learned to walk the dog a certain way....yada yada yada.

What was not doable was completely washing my back or shaving my head, as I am still left arm / hand dominant. You really don't want a razor in a hand that you don't feel is in total control scraping over your head.

Reaching out the car window to pay for things, or to use the key card at the work garage was just beyond painful. Raising the arm was annoying, getting back down became tear-inducing......though I never cried, I just put up with it. I endured.

Until the end of last week.

PT was just a double-edged sword. In theory, the therapy would / should make it better stronger and have less pain, but the pain I was having made it difficult to do the exercises. I tried to power through it - sometimes successfully, sometimes not.

Yesterday, I had an appointment for a cortisone shot.

I've heard stories. Horror stories. Success stories too. "The shot is so painful!".  "10% of people get flares, which make the pain worse."  or "One shot and I never had to go for another, the pain went away".  I figure I had nothing to lose.

I worried more about the shot. I'm not big on them, but really, who is? The doc, whom I really like goes, "I don't like needles".......as he was handling this one.

The needle injection was nothing. Less than a blood draw.  There was zero pain.

What I didn't know that they used ultrasound as the guide the needle. I could see - with instruction - the collar bone, the joint and the humerus. I got to see the needle too....via ultrasound.

So now we wait.

As I write this, the lidocaine portion has worn off, so there is a little ache from the needle stick. The full effect of the steroid won't be in place until the end of the week.

my spouse is due to get a hip shot this coming monday. I hope it works. I will show him this post.

Will be watching out for your next post with some apprehension, B, though only a fraction of what you're experiencing. Desperately hoping that there'll have been no need for it.

It does take several days before I’ve ever noticed the effect. It always helped. It always helped a lot. Sometimes taking the pain away completely. Unfortunately I was never one who had one of them last for more than 6 months. In fact six months was how long all of mine last. I could have started my own calendar. Everyone is different so here’s hoping yours cures, for some they do.

I have a lot of patients get these things. Good luck with yours.