Can we just agree, that regardless of what you think of BLOTUS, he has brought down the level of civility in this country?

THIS was the headline on CNN.

I'm a huge admirer and user of profanity, but I don't write my work emails with those words. And yet, how can the news organizations accurately report their stories by sugar-coating the choice of verbiage used by Offender in "Chief"?

At what point did we sink so low we have to use 'shithole' in headline..........I mean, ones other than a craigslist "personal" ad?

CBS - yep.  albeit, they are the old people's network, so you don't want to offend-offend. 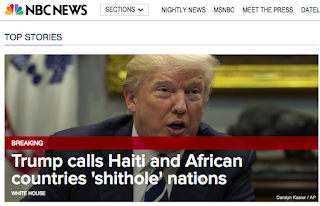 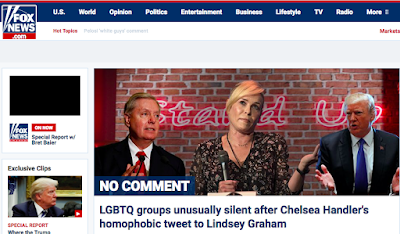 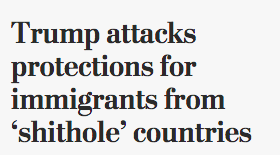 I expect Jeff Bezos and the WaPo to make sure it gets out there. 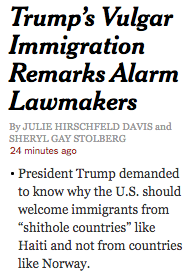 the New York Times takes the highest road, though they do use the word under the headline.

But yes, if you dare think that BLOTUS & Co are not extremely racist, you're either not paying attention or so far fucking deep in denial that you couldn't recognize it if it hit you right in the face.

Take a look at the headlines:  it hit you right in the face.

Norway is the Maine of Europe. 90% white. Not like "Haiti, El Salvador and African countries". You know - the shithole places.

So when BLOTUS talks about those places, he means people of colour. You can pretend he doesn't. You can says it's for other reasons, but he's talking about those folks being bad hombres.

The only truly bad hombre I see anymore sits his fat ass in a white house.

So this is it. Everyday this "man" takes the entire country down just a little lower. He's crass. He's rude. He's ill-informed. He's a bigot. He is a racist. I'd say he's ugly, but that sounds like I'm being petty.  So I won't say he's ugly.

BTW.....mid-terms are only 10 months away.  Fingers crossed!

today he gets his physical at walter reed...imagine the MD who has to touch that fat orange blob! double gown and triple gloves!

did you see the former prez of mexico's tweet - the only shithole country is the dump's big mouth!

As much as I'd like the agree about the civility thing, this follows a post called "penis song" so...?

very depressing, esp. as thems in charge are doing the let's repeat a lie until we all believe it approach on this