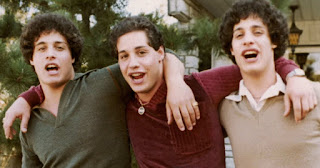 Three Identical Strangers hit the Cleveland International Film Festival a few months ago, but I didn't get a chance to see it then.

I'm not sure I would have even known about it, had it not been for a friend of mine, Josh, who was adopted into a Jewish family.

The movie centers on three adopted men finding out they're separated triplets - all of which happens in the span of like, three days.

Of course, there is the fun of the discovery and finding out their commonalities, but the movie take a dark turn. Turns.  Plural.

It's not just that the boys were separated on purpose, it's that it happened for an alleged psychological experiment. And not just them, but any number of identical Jewish twins. I say 'any number of' because no one truly knows how many.

So, those are some of the spoilers, but not all of them.

Depending on your point of view, regarding the boys, there is discussion about nature vs nurture. It all ties into what folks think the experiment was about and what it might have been about. Either way, the points of view still apply.

I would say the whole audience was captivated by the subject, but I'd also say the filmmakers missed a number of opportunities. Yes, they could have kept delving into how eerily these guys were alike, but never discussed their differences. There is also a part regarding each of the boys and their mental health issues as children. Sure, they mention it - barely - but in a movie that is so much about a psychological experiment, I would have thought it would go into greater detail, or at least tie in a little more.

The movie was very interesting and I liked it a lot. It's not an upper and there are no real outcomes, but still it's weird to know that in the 60s-80s weren't far enough from the Holocaust to forget that experiments were still happening involving the Jews.  The irony of course was that it was in America and with Jewish children.....with the help of a Jewish run orphanage.

Ok....maybe not irony, but sadness.


See it if you can in the theater, or when / if it comes to Netflix.

This film is coming this weekend to our local art theatre. It sounds very interesting so I'm going to try and see it.