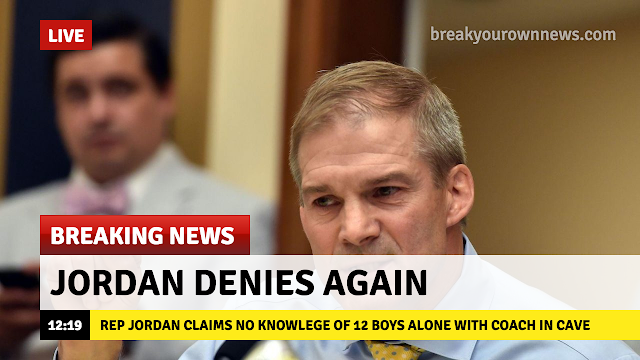 Granted the sexually predatory doctor from THE Ohio State University infractions came years ago. One one hand, Jim Jordan should have gotten out in front of it regarding his knowledge, especially in light of Sandusky & Co.

On the other hand, I'm thinking he was hedging his bets that it hadn't really come up before so maybe he had dodged a bullet and no one would be any the wiser.

He lost that bet.

About a half-dozen wrestlers have publicly stated that Jordan would have had to know - and at least one stating he told him directly - about the 'abuse'.

Yes, I put it in quotes. Lingering showers and lingering hernia checks are creepy for sure - and completely inappropriate, but sexual abuse?   These are men who dress in singlets and roll around on the floor with other men until they pin one to the ground.

I call that foreplay.

I don't really mean to dismiss what these guys went through. Straight guys {cough cough} are probably very traumatized by the notion that another dude is holding their nuts for 15 seconds.

Maybe more went on than that. I haven't read a lot about it to be honest  - not the details.

It's Jordan's strike backs that are just so typical in this BLOTUS environment: Blame the media and liberals trying to bring him down. Unfortunately, in this day and age, it's a tactic what is quite effective.

Jordan is an ass.....and a hack, but he's one who'll probably secure in his job and probable re-election.

........and yes, I doctored  (read: completely made up) the title image. Thank you, Break Your Own News Generator!

Wasn't this guy about to be Speaker? With Meadows and McCarthy out of the running, I was hearing his name a lot.

Maybe just stay clear of anything involving kids and wrestling if you want to be Speaker.

I think he's probably done. When the first thing the majority of Americans ever hear about you is a scandal, then you're either in trouble or else you're Bill Clinton.