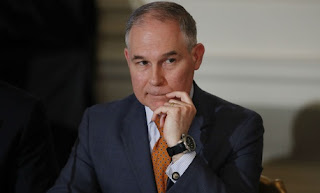 While Scott Pruitt doesn't quite have the Dr. Evil pinky-to-the-mouth move, I'll give him this - he has the actual evil part down.

Now an unemployed one.....that is, until one of those big corp big-wigs who has been blowing him to let them pollute our air and water ways hires him at ten times the salary he was making as head of the EPA.

For what little time he was in office - I'm guessing he was in line to have the highest number of investigations.  And to be clear - HE was the one being investigating.  EIGHTEEN federal investigations (with a 19th on the horizon).  That's more than one per month - if you average his time at this temp job.

"However, the unrelenting attacks on me personally, my family, are unprecedented and have taken a sizable toll on all of us."

As for your family - perhaps you should not have used government contacts to attempt to secure your wife a $200k/yr job, or sought out a Chick-Fil-A "business opportunity" for her as well.

For me, there is a problem with Scott Pruitt leaving the EPA.  He's already caused irreversible environmental damage. A named replacement isn't about to change any of the policies he's enacted. The problem will be - the next guy / gay just has to be less stupid than their predecessor (well......I'm assuming!) and he / she won't raise as many flags while they hasten the end of our existence.

Don't get me wrong - I'm glad Pruitt is gone. I believe many are.

LOCK HIM UP! GARNISH HIS WAGES!

Sadly, the world as we knew it is over, and won't be returning any time soon.