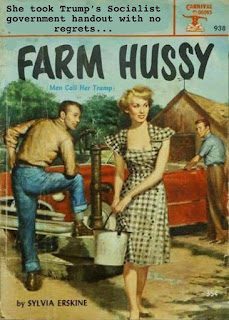 First off, I totally stole this image from Christopher.

Secondly, I can't believe I have to write about politics on my vacation.

BLOTUS - what a stupid fuck. His followers - what stupider fucks. But this isn't out of the blue. This 12 BILLION dollar bail out / subsidy is a tactic.

Sure, BLOTUS fucked the farmers with his tariffs and his trade wars fuck-up.  Sure, he's borrowing 12 BILLION dollars from China, one of the very countries with which he's going to trade war - so, irony!

And THAT isn't just a coincidence.

Many of these mid-western farmers probably voted for him in the first place, they probably are against socialism - so, irony.

This behaviour is constant and so exhausting - and depressing.

I really don't know how this turd isn't exposed for the piece of shit he is.  Yet.......here we are.

Song by: Midnight Oil
Posted by Blobby at 12:02 AM

It reminds me of the time I cut off my neighbor's feet and then demanded to be praised for buying him prosthetics.

Or, more realistically, that time that Donald Trump started separating kids at the border as his announced policy and then demanded praise for stopping his own policy.

we intelligent folk are trying to fix stupid, and we can't. it's so fucking frustrating!