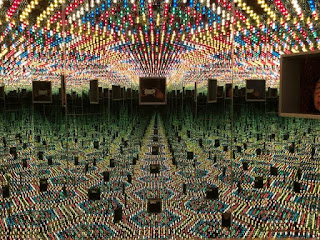 Sunday we went on a triple date with friends to go see the newest exhibit at the Cleveland Museum of Art.

Yayoi Kusama is an contemporary artist who was way ahead of her time. As you see her work, it evokes the likings of many other artists who came after her, as she originated it and others co-opted her work while she received zero credit - be it paintings, sculpture, performance art or installations.

Infinity Mirrors is a series of, well, mirrored rooms or mirrored spaces.  The rooms, for the most part are full sized boxes that hold 2-3 people at a time. Each exhibit is timed where you spend anywhere from 15-30 seconds in them.

There are other parts of the exhibit that are the paintings, sculptures and polk-a-dots - all culminating in a final interactive room called 'Obliteration".

The above image is from a portion where you just stick your head in. I found it very cool. And hot. All the lights made it very very very warm.

Most of the rooms were dark, a few were not. Some you could take pictures in, some you could not. One you weren't even allowed to take your camera in and a security guard came in with you.

We usually went in two at a time, and alternated who went with whom, so we go to spend a quality 30 seconds each with everyone 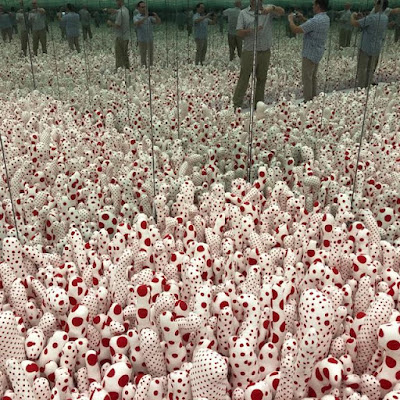 I'm in here with Chef Bob. 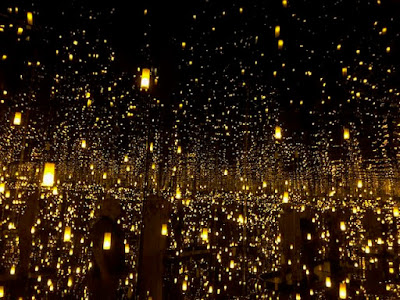 Here I am with 710.
This was my third favourite room. Most everyone else said it was their fave.

My favourite I'll show at another time, my second was the pumpkin room - the one with the hovering security guard. 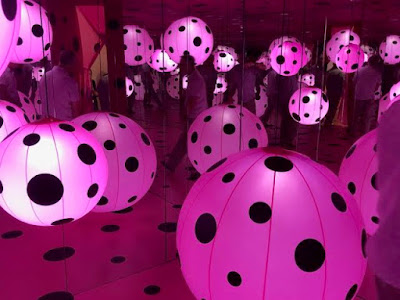 This room I'm there with Matt.

....and then Obliteration Room. 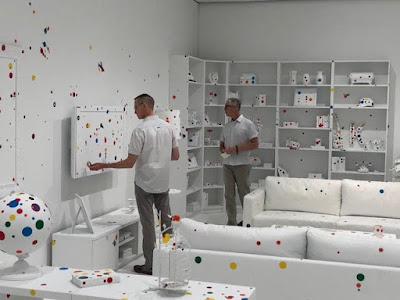 Everyone is given 5 dots to place anywhere in an all white room.  James and Matt were thoughtful as to how and where they placed them. They separated all their dots. 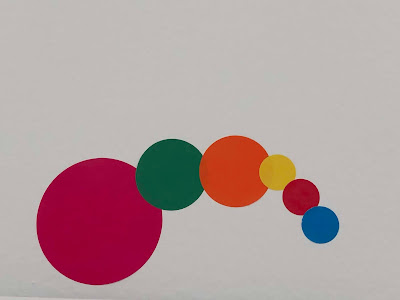 Since I'm taller than your average bear, I placed them high - it will take a few weeks before anyone obscures my art with their shitty dot-work.

It was a nice show. I liked the mirrored rooms a lot. The paintings and phallic sculptures were not my thing (I know, right!).   Kusama was forced, as a young child, to spy on her father's infidelities, which probably explains the penis-like and vagina-like sculptures.

The show has already been to NYC and DC, but if you have a chance, by all means, go see it.

I would go see an art installation like that.

I love be her. She had an exhibition at Tate Modern a few years back in 2012. I actually have a picture of hers hanging in my kitchen - she’s laying in a room full of penises with spots on them!
JP