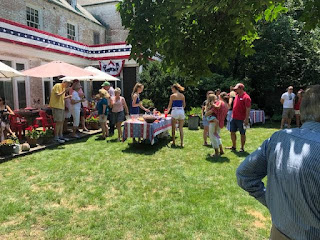 My rationale is: you can bitch about one, but not the other. Should I stick to this - I'll moan about the frigid temps, as it takes a lot more to get me to warm up than cool down.

Still, Mother Nature has been testing me this last week with the temps in the 90s and low 100s. Mother Nature and Father Time, that is.

....and the big house with no central air.

In the past, we've skirted around getting it installed. My reasoning is:  we truly only need it for 12-20 days per year. That's a huge expense for two-three weeks. And then when it's not hot again, the thought goes right out of my walnut-sized brain.

This year might be different. Well, next year, actually. 710 is getting quotes. Alas, for a 118 year old house with no duct work, make for a pricey endeavor, as creative ways would be needed for retrofitting the house.

I say 'next year' because the HVAC guys all say it can't be done until Winter.

Yesterday's 4th parade and picnic were a scorcher. They are usually warm, but everyone was melting at 93 by noon.  We gathered to say hi to all those in the parade........and then we went home. We did not 'march'.   We went to the after picnic but that too was beyond hot.  It was possibly the least attended, and I'm assuming it was because of the climbing temps.

The picnic was still fun. I made a cucumber-tomato-red onion salad. It was a cool item and was gone within minutes....and I made a lot.

Allegedly we are to get a break in the weather in a few days. Hopefully we will.  And hopefully next summer we will have a/c.

my co-worker just spent 7500+ for a central air system with duct work. his ranch-style house was built in the 60s. good luck!

Stay cool, stay relaxed. The salad sounds like a nice Cooking with Blobby posting - I need something for Saturday.

As a realtor who works and lives in a historic city full of 100+ year old homes without central air, I have seen lots of folks use ductless mini-split systems by Fujitsu. They're usually intended for a single room, but since you only need A/C for a month out of the year, you could consider 1 for your bedroom and 1 for your living area. 2 units plus installation will probably be under $5K. Food for thought.