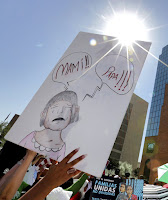 I suppose there is a slight downside of being off Facebook and looking at limited news.

Blobby had no idea there was a march - or 700 of them - regarding immigration and separation.  Had I known, I would have braved the 95 degree heat.

It's not enough to blog this shit - you have to show up, and I'm sorry that I didn't know about it to just that.

In the big scheme of things, I don't know how much of showing up will change a thing with this uncaring, unfeeling administration. However, somewhere in history there will be notations - or 700 of them - of people pushing back, protesting, opposing.

Maybe it will be just a note, but it will be there that not all were on board with the insanity that was the U.S. in the early 21st century.

Song by: Shakespear's Sister
Posted by Blobby at 12:06 AM

Yes, it was too hot for me to go brave the heat yesterday, too. I worry that someday, I'll look back on this and ask myself (or get asked by younger folks), "What did you do to oppose what happened back then?"

Mr. Harry has a good point. One I need to remember always.