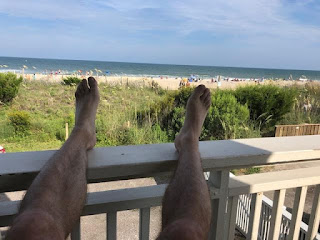 Due to a work project I was told I could have no time off in August, so we went for late-ish, July.  Naturally, said project got pushed back to September now.

We did not go to Maine this year, but back to North Carolina. We did not go to the Outer Banks like normal, but closer to Wilmington, as it it closer to my sister-in-law (who relocated there recently) and her daughter.  We are hoping to entice them to join us for a day, or five.

The trip down was, let's say, not the greatest. It was ok. Better than I-95 to OBX, that's for sure. An hour of West Virginia driving was harrowing, and I wasn't even behind the wheel. It was teeming, and at times having less than 40 feet visibility.


We made it to Raleigh, and yesterday we spent three hours moving my sister-in-law into her new place. It was the best three hours I've spent in 2018.

But we made it to the beach in the afternoon.

710 really wanted a house on the beach. Not near, but on. He got his wish. 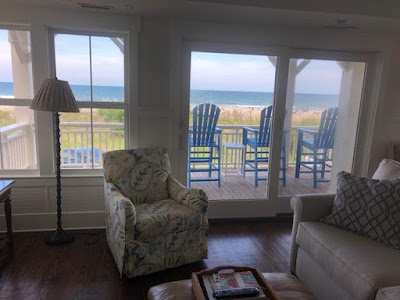 It's a beautiful place, but they don't allow pets, so no Shep. Our heart breaks a little.

But we have three bedrooms, three and a half baths, two balconies, a full kitchen - and now after a trip to Harris Teeter, a stocked one too.

I get people think having to make food during vacation is wrong. It's nice not to have to go out. And let's face it, a lot of the fridge is stocked with wine and beer.  .....and some ice cream.

So yes, I'm sure I'll be posting daily.  I think.  I'm giving me the option to opt out. And if I don't, my posts might not be scheduled like usual.  I really am taking it easy this week.

what a miserable day for a long drive. but the beach house is a nice reward. sorry you could not bring shep. :(

It looks lovely; I hope it is a marvelous holiday for you.

Wow, what a great view! Hope you guys enjoy lots of eating out, sleeping in, naps, reading, and relaxing. :-)