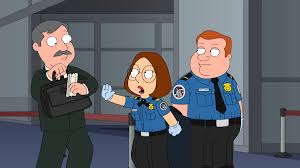 What is up with the TSA?

Really?  For years they've been following passengers?  And they don't call it 'surveillance" - which might be the biggest joke / insult of the entire thing.

As a guy who was a road warrior, I had to chuckle at the criteria for being followed:


One has to ask:  has TSA actually ever been ON a plane?


Save talking to other travelers - because who the fuck wants to do that? - this could be me.

Ok, I don't really sweat or tremble, but you have been on UScare, right?  Almost everybody sweats, trembles and blinks.   .....then invariably uses the bathroom....and usually right after the movies is over, but before the credits.

The phone / computer thing killed me.

I guess the bigger question would be: how many people does TSA actually employ?  Because of these are the triggers, wouldn't they have to follow 74% of every plane everywhere?

I get we have little privacy anymore, but what is the end game here?  What it tells me is that TSA didn't do their job at check-in, at bag check or at assigning pre-check.

You want to follow me, TSA?  I dare ya to go into that airplane bathroom after me! I dares ya!  I also triple dog dare you to look at my phone. The music selection alone - as anyone here will attest - will make you cringe, though it's probably not a lock-up-able offense, must to the dismay of many.

I'd say this is all just so fucked up, but these days it barely warrants a shrug.  And that's kind of sad.