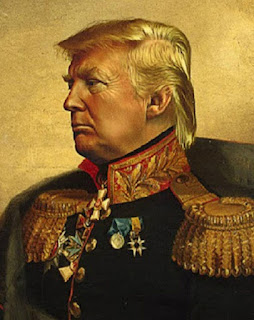 For the record: I did not watch BLOTUS' televised whatever-it-was the other night. It was never going to happen. Nor did I read about it later, or the Democrats response.

This entire government strike shutdown is just too much.

BLOTUS' assertion that he can and might keep the government shut down for months or YEARS isn't as preposterous as it sounds.

First off - let's talk the economic impact. We're not just talking the 300,000 or so workers who have zero income coming in - and not working.  There's also the 500,000 or so who are working and not getting any pay.

For months or years - how is this sustainable without plummeting the U.S. into a very decrepit state?

Unless of course, that is the plan.

All we need is one Harvey or Katrina to push that far past the brink - and yes, hurricane season is upon us.

But this shutdown isn't just about the government workers - all the areas that are supported by those folks, including places to eat, etc are in peril as well.

The other day, I got a text from my friend Jeremy, who said it took him 3+ hours to get back into "the country" when he flew from Mexico to Atlanta. He was "in" Atlanta, but with less and less TSA support, it was three hours to process him through customs.

And exactly how are the military folks being paid? Or are they? And if so, for how long?  Or is the plan only to pay THEM, to keep you under their thumb?

Here is why shutting down the government for an extended period of time isn't preposterous:

If one was planning, plotting and scheming to truly fully take over, why not cripple the infrastructure: roads, air, rail, military, emergency services?  Why not only pay the military so they "keep the peace" at your directive?  Why not surround yourself with some of the worst people in the world who are happy to spew propaganda - and yes, I'm looking at you Fuckabee-Sanders.

I've said before that I don't believe that BLOTUS will leave the White House voluntarily even if voted out. But with a government shut down - who exactly is administering the 2020 election?  The DOJ?  Fuck, they're not even removing easily validated false claims about 4,000 terrorists arrested at the Mexican border (honestly, do we believe that our jails would be wall to wall Hispanics? Where would BLOUTS but the other people of colour??) out of their records.

It is not like we have not seen this coming - albeit, it is at a faster pace than even I would imagine, but now he's under a 2020 deadline.