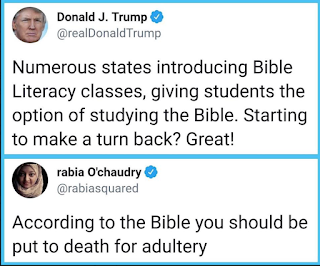 Do you think BLOTUS reads any of the tweets that come his way - or the ones that respond to his 280 character vomit?

I'm thinking now. I think his communication is outbound only. If it's not about him, why even bother, right?

The problem I find with folks who do respond to him is they don't use the @BLOTUS so it not only goes back to his account, but to everyone who follows that buffoon.  Make sure they all get the message.

Case in point - look to your left.

It's a great response.  Period.

Those who allege to be Christian can't even argue with this. It's true.

Well, as true as one book can be, I suppose.  But since said Christians use the bible as their life manual - except when it's not convenient for their current / past / future behaviour - if any of them tried to slam the responder, what could possibly be their rationale?

BLOTUS committing adultery isn't an alternative fact. It's just a fact.  Much like the rules for haircare are simple and finite, so are the laws of the bible.

Exactly so, B. At the risk of inducing a yawn, I'll write again that it's now over 50 years since I embarked on reading a passage from the Bible daily (well, almost - around perhaps 98% of days) - as well as excerpts from the Koran (that one getting on for 40 years now). No sources have been more influential in guiding me blissfully towards atheism, a frame of mind in which I've been comfortably ensconced for something like well over 20 years. Then why do I continue reading them, you ask? Well, I have a number of 'odd' routines, such as reading a Shakespeare play every single month since I was about 18, learning all his Sonnets by heart (yes, all 154 of them), reading 6 poems daily, as well as learning many by heart too, reading from history, literature.....and several more peculiar habits.
But back to the Bible - and very strangely, tomorrow's reading will actually be those parts of Leviticus which are always shouted threateningly and at us as though they were definitive proof - you know the "It is an ABOMINATION!" section - as well reading on the travels of that arch-homophobe (and closet gay?) St Paul in 'The Acts of the Apostles'.
The cherry-picking which you mention becomes ever more obvious the more one is familiar with the texts, which leads one to conclude that those who insist on quoting from the Bible can't really have read it that much!
On my current reading what is showing up in particular relief is how in the Old Testament especially, 'man' is repeatedly instructed to sacrifice animals up "as sweet savour to the Lord", being recompense for man having 'sinned'. Cheeses Cripes! It's not the poor innocent animals' fault!
I'll continue my perusal of these silly, demented scriptures as it consolidates and reinforces my comfort in the knowledge that there's NO such God as the one that's expounded here.

dump has forgotten about SEPARATION OF CHURCH AND STATE, or he just doesn't fucking care as long as his rabid xstain ignorant deplorable base is happy.

ya want religion, go to a religious school and leave the rest of us alone!

With all due respect Mr. Blobby, it was the laws from Moses that stated stoning to death for adultery. Jesus changed that. It is folly to make theistic arguments unless you are familiar with the material.

Yet as I state that I read another posting who claims he reads the bible frequently. I suggest he re-read John 8. Its easy:

Peace to you all.

So, Anon, J.C. changed the law of Moses which had been taken as authoritative since about 1,300 years before. Makes me wonder how many women (and men?) needlessly died before J.C. came along announcing that God had changed Her mind! I only wish She'd made her mind up earlier!

Btw: This story of the woman taken in adultery always makes me think of the joke where J.C. says to the murderously-minded crowd ready to rain stones down on her "Let (s)he who is without sin cast the first stone!", at which the crowd, stones in hand, feel abashed, drop their ammo and start slinking away guiltily - when a rock comes gliding over everybody's heads and - smack! - hits the woman right on her forehead. J.C., as shocked as the rest of them, cries "WHO DID THAT?" Silence - then the crowd parts like the Red Sea, and at the end standing alone is a little old lady, looking at the ground, but with a mischievous look on her wizened face. J.C., with exasperation cries "Mother! Really!"

With all due respect Raybeard, Jesus confirms that these laws were not from God, but from rabbis. He also confirms things like "an eye for an eye" were not from God. One of the main points of Jesus was that rabbis and scribes were making rules to speak for God, and that we should change that, and follow his teachings, which he claims are directly from God.