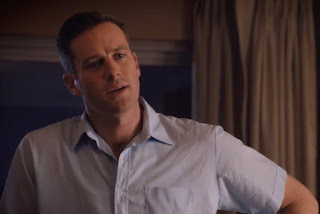 Two movies in less than half a month?  Crazy.

Let's face it, we know any decent flicks are about to dry up now that it's 'award season' (still awaiting my prize from the Globe win......).

Saturday, after a snowing / perilous walk, we dropped Shep at his apartment and hightailed it to see On the Basis of Sex.

Sure it's about the Notorious RBG, but you know, her husband is played by Armie Hammer, so why not throw his image up here?

I barely remember Felicity Jones from Star Wars: Rogue One, yet here she is, playing pre-Supreme Court member, Bader Ginsberg, in what seems a horribly miscast role.

I guess Jones is fine, but that's as far as I can take it.

The movie centers on her law school and first big case life. It's a 20 year period (or so) from the mid 50s to early 70s. While I was not familiar with RBG's work pre-SCOTUS, the story here seemed way to predictable (spoiler alert:  she doesn't lose the case.)

And when I say 'predictable' I don't mean with the particulars of the case, but the set up and execution.  The taking of the case, the worse case scenarios, the stumbling in the courtroom  - until that moment when the lead realizes Chutney couldn't have been washing her hair at risk of deactivating the ammonium thioglycolate in her perm!

Ok, it wasn't quite that, but you get the idea. It was very formulaic. ....and the end was extremely heavy-handed.

Kathy Bates, as usual, was probably the best thing in the movie. Steven Root and especially Sam Waterston were justifiably unlikeable - as they were the right-on-cue 50s-minded white males (read: predictable).  Justin Theroux was fine, but not horrible though you saw even for that time the 'liberal' white male wasn't all that liberal.

Hammer, and especially the girl who played their daughter, were possibly the best on screen. The girl would become the heart and promise of the movie - and while kind of expected, the filmmaker didn't overplay it.

The theater was well attended, opening weekend and all. Since it was a matinee, the audience was, well, elderly - present company included. Had there been a fire, we would have perished due to the walked and cane crowd. Or we could have escaped by running over folks I assume, but the fall-out from that would be horrible.

The  two folks behind us were talkers. The lights had already gone down, so we didn't see them arrive.  It's not only that they talked, it was just at weird times and well, the wrong kind of things.  A lot of "awww!", but with upward inflection that made it seem like it was an endearing moment, when it really wasn't.

It really got to the point you thought they'd say, "no girl!  do NOT go into that courtroom!"

I am amazed by all the television advertising for this movie. It's not that great and the subject has what I would consider very limited appeal.

On the Basis of Sex isn't winning any awards. It's not a stinker, but it's not going to take home any Razzies either.

I'd wanted to see this but what you say has massively quelled any enthusiasm I had. There's been a single late evening screening at one cinema, and I suppose that'll be all there is, as the figure is hardly known here, if at all. Sounds like I'm not going to be missing much.