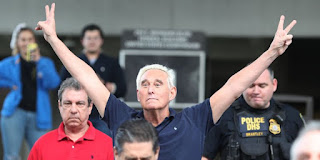 First off, it seems I don't have any songs that have titles containing 'Nixon' or 'Crook'.

They exist, but not in my music liberry. That I found this one, seems to work. That Garbage is the artist just seems to work on multiple levels.

I'm not really surprised at the arrest of Roger Stone. I am super glad it was a long long long time associate of BLOTUS.  Not one he can discount or say he barely knew him and was only with the campaign a short time.

That Stone thinks he's untouchable - or I think he thinks that he is - as you can see from the video he made below. just infuriates me.  Though let's be honest, it doesn't take much anymore.  He doesn't help his case.


.....though he seems to think it's all fun and games. Or at least funny.  He's no Shecky Greene.

I thought the Nixonian, arms-thrusted peace signs were a bit much after his arrest / bail, until I found that this fucktard takes his love of Nixon one step further. 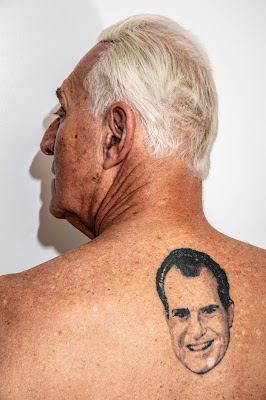 In what fucked up world does someone idolize Nixon in the form of permanent ink? Which way does his moral compass point?

Oh who am I kidding. This guy has no morals. But look at his buddy.

BLOTUS has hitched himself to one cray-cray wagon. It seem they deserve each other. There are lot of options when it comes to Presidential pardons.  I'm guessing the guy BLOTUS has known for 30+ years has a better chance of getting one than say a Manafort. And he'll probably get it before any trial, let alone sentencing.

Stone has reason to be a confident fucktard.  But make no mistake - he IS a fucktard.

over the weekend, the dump said "he didn't work for me". yeah right! stone is a sick fuck.