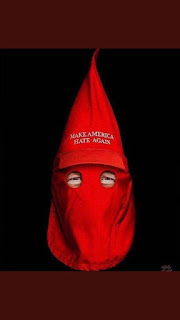 I've never once seen an episode of Who's the Boss?.  But I'm up enough on pop culture to know who Alyssa Milano is. And I'm ok with her using her "celebrity" (I mean, is she?) to stand up against the Harvey Weinsteins and BLOTUS' of the world.

Her comment on the MAGA hat being the new 'hood' is on the mark - even if she wasn't the first to make the statement.

There was also some house rep calls BLOTUS the "Grand Wizard of 1600 Pennsylvania Avenue".

They both have gotten flak for their comments.  Yet, I'll take it a step further.  BLOTUS' wizardry goes well beyond DC.  It goes at least to Covington KY - not that there was any danger in folks from Kentucky being enlightened enough to not want to be in the KKK.

Regardless if that kid in that picture was a menace or not - I still want to rub his face over rough asphalt...........but just for 3-4 hours....continuously.

And that is the real problem, isn't it?

Not my asphalt assault. Not exactly. Or, maybe actually.

Let's says - hypothetically - that the snot-faced kid did nothing wrong. The visceral reaction from many (myself included) was that he was wearing "that hat" so inherently he was a fucking asshole and of whatever he be accused, it must be true.

You can say otherwise, but I think the number of FB posts, tweets, memes, et al with that fucking kids smarmy face tells me and millions otherwise.

I will say, the difference between the hood and the hat is, the KKK operated a lot more in secret and by cloak of darkness. This is all out in the open now. Right there for all to see. And yet, here we are - and moving not closer to shutting this down.

THIS! you wear ANYTHING dump related, you are part of the problem. and this fucking shutdown drags on and on and on...

The red hate is clever that it gives great offense/in your face without admitting to it. It is a success.