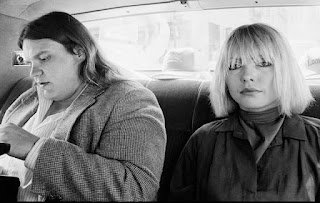 Death certainly becomes recording artists, don't it? Or at least their estates.
Meat Loaf died two days ago and because of that, and only because of that, 13% of all the albums on iTunes top 100 are either Mr. Loaf's or two Rocky Horror soundtrack on which he appears.
Meat - and honestly, that is what he liked to be called - had like 16 albums in the span of his career. Who knew?
And while he would say that Jim Steinman didn't define him, I'd challenge you all to name one song - any song - he did that was not penned by Steinman. His one song in Rocky Horror, before he got chopped up (ooops, spoiler alert) does not count.
I wrote almost a decade ago that friends Morty, Jon and I were debating whether Mr. Loaf's debut disk, Bat Out of Hell was a good one. At that time, and even to this day, I'd still argue that it is......or isn't. Depending on the day. And my mood.
There are times I think it is brilliant. There are times I cannot stand to listen to a note. I think it's over the top, and yet some of it is very clever. And to Meat's point, I'm not sure Steinman's music would have worked in the hands of any other artist..............though Bonnie Tyler, Air Supply and Celine Dion all made him coins later on. At least I semi-enjoy Tyler's two (?) songs she does of his.
Morty claims he lost his virginity to his album.  I mean - it can't be the entire album. That lasts about 47 minutes for only seven songs. No newbie to sex is lasting 47 minutes. He clarified this to specifically "Heaven Can Wait" - which is less than 5 minutes.  That tracks.
I'm 100% sure I didn't have a song with which I lost my virginity. I can't even think of a humorous alternative to which it might be.
Was I sad that Meat Loaf passed?  Not really. I didn't feel one way or the other. I felt less so with his "if I die, I die" quote, in terms of Covid. He claimed it was politics; not medicine / science that took away our liberties. So, if he didn't mask and wasn't vaxx'd and didn't wash his hands, then  Three Out Three is Bad.
I have no sympathy for him or his loved ones.
....and if one must have a pic of Meat Loaf in your feed, it should at least be with Debbie Harry. I'm assuming it was around 1979 when they made the shitious picture Roadie.  Even Blondie did not do justice to Johnny Cash's "Ring of Fire".
Song by: Meat Loaf
Posted by Blobby at 12:07 AM

I was staying at my sister's in Tennessee for a couple weeks in the summer of 1980. She dropped me off at the cinema to watch a movie while she ran errands. Two movies were showing: Roadie and The Shining. I chose Roadie. Been making such stellar decisions ever since.