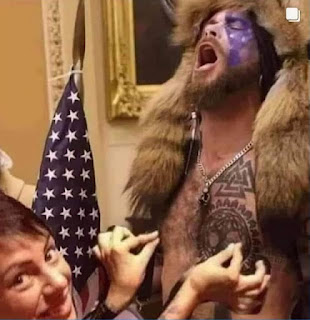 This pic is about the only fucking amusing thing from the insurrection from a year ago.
The only way it'd be funnier is if a gay black democrat in a Biden hat was doing the titty twisting.
I'm guessing the Capitol Shaman is getting a lot of that in prison these days. But not in that pleasurable way some find it.  ......I've heard.
If you've read me for even a nanosecond, you'll know that January 6th still sticks in my craw. You could almost say the actions were predictable and expected.
Ditto with the inactions of anyone within power - from the Capitol Police who let some of their own get in harms way, while others of the same force held doors for the insurrectionists.
Of course, there are the tours the day before and video of a guy placing bombs and miraculously no one was ever found.
My biggest beef is with Congress - both sides.
When Liz Cheney is madder than anyone about this and the only one to lay her job on the line for it, that is fucking sad. Sadder than that: Pelosi is letting that happen. She's like the fucking crypt-keeper and would rather hold onto her job than do it.  She's like eighty-fucking-three. Go out in a fucking blaze of glory you hag!
McConnell still runs then Senate (thank you, useless Chuck Schumer), so NOTHING is getting done there.
.....and then there is this shit.

Yes, because fucking storming the fucking Capitol with potential intent to harm and / or kill to subvert the electoral process isn't 'partisan political weaponry'?
FUCK. YOU. ALL.
See, I said it still stuck in my craw.  And BLOTUS still walks the face of the Earth.....untouched.
I hate this country.  ....and they make it so easy to do so.
Song by: Sheryl Crow
Posted by Blobby at 12:07 AM