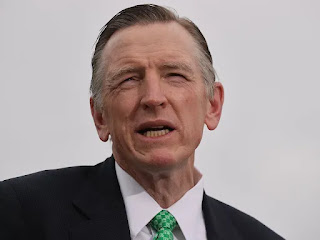 Besides being a Grade A dick of a politician and inciter of violence to a colleague, this "man" is a fucking dentist.

Take a close look at him. Really look at that pic.

Now, imagine him putting his fingers into your mouth.  ....and paying him to do it.

For what it's worth, the House voted to censure Paul Gosar. Save for taking him off two committees, it's all very meaningless.

His crime - for the record, when academics breakdown the end of civilization as documented here and there in this blog - was creating an anime style video that depicts him murdering Rep. Alexandria Ocasio-Cortez and attacking President Biden.

His "rebuke" at the censure hearing?   "no threat was intended", said he.

Even he can't stand by his own shit.  JFC dude, you made the thing and posted it, at least stand behind your actions - right or wrong. And you know it wasn't even the first draft / version. But you were a fucking pussy and deleted the video. Why? Thought it wasn't a good idea to have it in the first place?

It's not your conscience, because it's doubtful you even have one.  You're a GOP house member and dentist from Arizona.  Three strikes.....right there.

Of course, save 2-3 GOPers, none voted to censure him, so........of course they stand behind the big bad white man. Because they all think it's ok.

Liz Cheney - ugh! - voted to censure him. I hate giving her credit for anything. So did Adam Kinzinger - the only GOP guy who has balls (well, I'm guessing Liz has a pair.....literally), so of course he's not seeking re-election, so a much more conservative GOP guy - yes guy! - will take his place.

David Joyce - a 'tard from my area in Ohio - voted "present"......whatever the fuck that means. I guess Liz has won his balls in some late night poker game.

Whatever Gosar's intent, some stupid asshole would easily take up the cause to kill AOC. The GOP was SO up in arms about her dress that said 'tax the rich' but look the other way to a threat to kill.

What Gosar & Co won't expect though is, should it happen, yes, there will be glee on the Right, but they won't and don't anticipate the martyr affect. This will not work out for them in the long run. But that said, with all the gerrymandering going on in this country, the Dems won't have a chance of winning a House seat for the next 10-20 years.

He has to have tertiary syphilis, he re issued the Gif/Anime before the afternoon was out. Needs to be put out of his misery