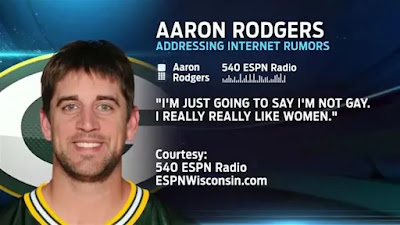 I'm not saying he's gay, I'm just saying he had a public tiff with a male roommate. You know, because many multi-millionaire professional athletes need someone with whom to split the rent.

I have a feeling the break-up was over, "hey, did you eat my last yogurt?!  I was SAVING that!"

No, now he's having a hissy because he's been found to have publicly lied about having gotten the Covid vaccine.

What a nancy-boy. It's no wonder he's a "packer".  Allegedly.

Somehow he's mad at the "woke mob". He's made at whomever leaked the information. He's mad at the press for reporting it. Perhaps the person he should be mad at it right in the mirror.

Of course, the funniest thing about this shit is his admission that he went to Joe Rogan - a failed actor and now a flaky radio show guy - for advice on where / how to get treated for Covid.....for which he's tested positive. If memory serves me well - and it does - Rogan doesn't have a medical degree. Probably not a high school one either.

Oh, and his rationale is that he wants to be a father someday and you can't do that with the vaccine due to fertility issues. If that's an issue, then jerk off into a cup for later. But in reality, butt-babies aren't real things anyway, Arron!

Rodgers has at least one sponsor  - a health care system! - drop him. Honestly, I hope there are more. Though I don't know who normally hires professional rumoured gay football players as their spokesperson. Yeah, the company and Rodgers put out a joint statement saying they'd end their agreement, which they just signed a four year extension. I'm pretty sure Aaron didn't have a say in this termination.

I have a feeling, the folks at Jeopardy are thinking they dodged a bullet not picking this guy as their new host. It'd be the second guy they'd have to fire in as many months.

Song by: the Mavericks

I defer to you Blobby, I have no fucks to give for Aaron Rodgers.