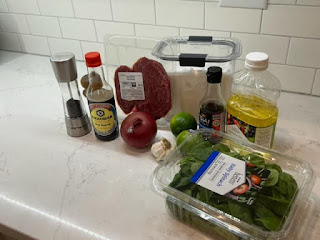 I've been doing a few new dishes here, as you've been reading - or maybe skimming. I get it.  I'm a little bored with our staples, so I gotta jazz things up a bit.
I'm not a huge fan of Milk Street. It's ok and all, but everyone is SO tightly wound, though they're trying really hard not to be. There is like one woman and one guy there that I can tolerate. Most of the recipes I kind of shrug my shoulders and go....meh.  They seem to go out of their way to be exotic and rarely would I want to make one of them.
But they had the pasta dish from a few weeks back is there - and it's totally easy, and since I made it that first time, we've done it about every 10 days. Super simple, super quick, super tasty. Ditto with the one today:  No-Shake Shaking Beef..........a quasi-Vietnamese dish.
I think this should serve four. We cut this recipe in half and it served two.
Ingredients
1.5 lbs beef, sirloin tip / tri-tip.  Patted dry, cut into 1.5" pieces
3T  soy sauce. (2 for beef; 1 for sauce)
5 T lime juice  (3 for  2 for
3 T fish sauce
2 T white sugar
2 T neutral oil
8 medium garlic cloves, finally chopped
1 small red onion; sliced  1/4" thick
1 bunch of watercress*
Preparation 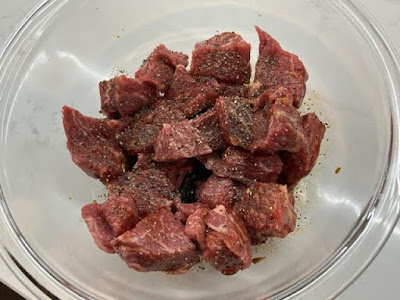 Add the beef, two tablespoons of soy sauce and 1/2 t of ground black pepper in a medium bowl.
Toss together. Set to the side. 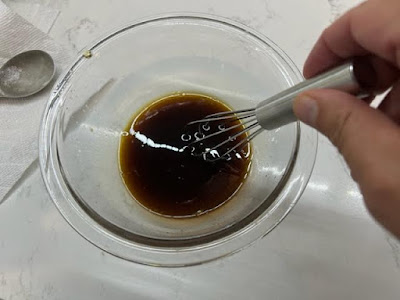 Mix four tablespoons of lime juice, the fish sauce, sugar, and one tablespoon of soy sauce in a small bowl. Set to the side. 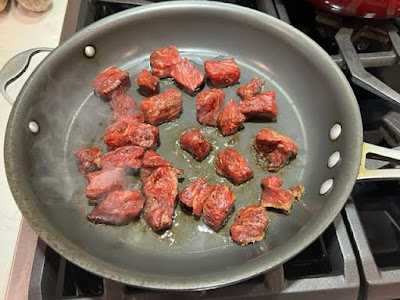 One tablespoon of oil in a pan, make it smoking hot.
Sear the beef on all sides - maybe 2 minutes each side.  Take out of pan, put into a bowl. 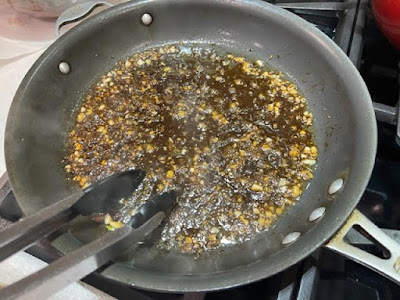 Add one tablespoon of oil, the garlic, 1t of ground pepper and the juices from the cooked beef.
Cook on low heat for 30-60 seconds, until garlic is fragrant. Let it thicken until syrupy and you can use a spoon to draw a trail through it.
Add beef and cook, stirring and scraping up the browned bits. The sauce should cling to the beef. 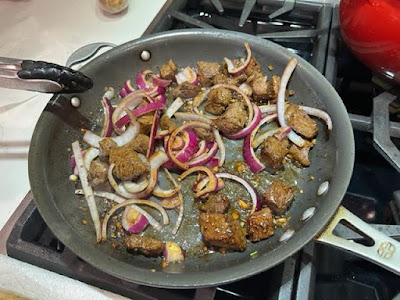 Add the onion. Stir until softened. Remove from heat.
Put the watercress* in a bowl. Add 1T of lime juice and 1/2 t of salt and toss. 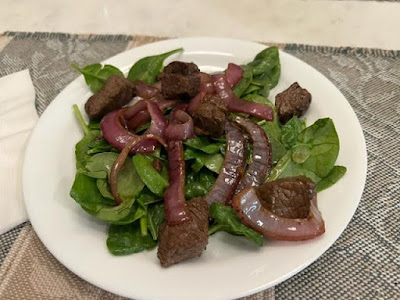 Put the greens on a plate, put beef & onions on top and serve.
This fixes up very quickly. Peeling the garlic probably takes the most time.
This had really nice flavours, but I might do a few things differently - slightly. The fish sauce is salty. The soy sauce?  Salty.  ...and salt in the greens. It was just a tinge too much. Nothing overpowering, but it flirted that way.
You are supposed to have lime wedges on the side to squeeze on the beef, but I didn't have an extra lime. I think it would have been nice.  Good flavours. Good texture.  Cooks up in minutes. It was a decent and different meal for any night, let alone a quick meal on a Monday evening.  I'd do this again, easily.
There are a few bowls and measuring utensils, but you know...........I have a 710, so........it's all good.
*I used spinach, mostly because I've never had watercress.......nor am I 100% exactly what it is or tastes like.
Posted by Blobby at 12:07 AM

Watercress is sweeter, probably a little more flavor, the spinach was a good substitute.

You mentioned that peeling garlic probably takes the most time. Are you still using that garlic-peeling rubber thingy you wrote about a while back?

GregM - oddly enough, I just remembered it yesterday and used it on half. Works perfectly. I'll never forget it again.