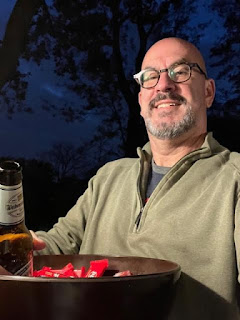 A Halloween success!
Clearly, that is all relative.
At our last house, in 15 years, I can count on three fingers the number of trick or treaters we had. Last year, our first at the new house, we had a total of 18 - which while leaps and bounds over the previous decade and a half, seemed low. Then again, it was in the middle of a huge Covid surge.
I thought I was doing well when I bough three bags of candy this year. 710 and his sister both told me, four hours before the festivities, that they didn't think I got enough. So I went to the store, got three more bags.............and a six pack.
On a Zoom call with my friends beforehand, I got razz'd about one of my candy choices. I had Milky Ways, Reeses Cups, Kit Kats, Three Musketeers and Peppermint Patties.  It was the latter one for which I got the flak.  As Mort said (I think it was he): toothpaste wrapped in chocolate.
It was a relatively nice evening - in the 50s - and I stood outside with the candy.....and beer.  The standing outside thing was mostly to keep people from ringing the bell and setting off Shep.  But I also got to hang out with our new-ish next door neighbor. So far, we really like him and his wife. Many of the other neighbors that I actually know came by for a chat as well - so that was nice.
I also got to meet even newest neighbors. Well, the guy. His "wife" was "out of town".  He pushed two dogs in a stroller (I kid you not), so I went inside and got dog treats for them, at which they turned up their nose!  Of all the nerve!
I got to pretend "ooh and ahhh" over most of the costumes. Two brothers came up, both as Spiderman, which I told them there could only be one.  I half expected them to educated me on the multiverse, but luckily they didn't.  A guy kid came in a dinosaur costume and I asked him he was dressed as Wonder Woman.  It got a chuckle from the dad, and a quizzical look from the kid himself.
I swear the ones over 8 didn't even bother dressing - it was just a candy grab. Literally. Some were going for full handfuls. I put a stop to that. But it kept happening and at times quite aggressive. None of these kids were from our neighborhood. They literally pull their car in front of 2-3 houses, get what they want and drive a few doors down. It's why I remember stopping participating in trick and / or treating years ago.
But a few other people brought their dogs. One was just a fun loving pit bull.  Nona gladly ate my treats. And I got kisses. Allegedly she was dressed as Baby Yoda, but honestly, it could have been anything. 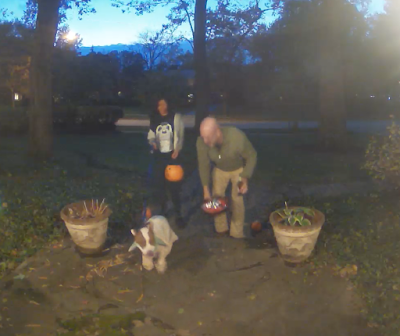 What she was, was adorable.
I didn't get drunk or anything, and we came close to running out of candy - even the chocolate toothpaste discs......which is a shame, because I like those.......though I probably don't need them.
I think we had about 80-90, which easily beats the 18 from last year and the three from the combined 15 years before that.
....oh, the title was misleading. There was candy. No sex.
Song by: Marcy's Playground
Posted by Blobby at 12:07 AM

Email ThisBlogThis!Share to TwitterShare to FacebookShare to Pinterest
Labels: Halloween

I think a lot of people are more ambitious this year. My SIL in Louisville closed down After giving out 60 full size candy Bars. I like Peppermint Patties too.