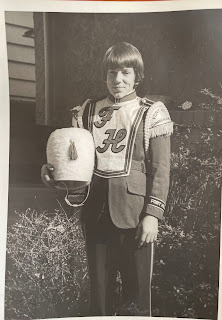 I married this dude 11 years ago.

Actually, 710 might have been in high school when this pic was taken? It's doubtful there are marching bands in middle school. I don't know for sure - my primary and secondary schools didn't have one at any level of education.

If I'm being honest, I have no reason to write about year 11. It's represented by "steel".  I suppose 710 is strong as an ibeam to put up with the likes of me, so it seems appropriate.

We probably wouldn't have lasted this long had he kept up with his saxophone playing. At least one supposes. We don't know what we don't know.  .....though I totally know.

Still, an anniversary, on a Wednesday, during a pandemic, screams "make something at home!", which we probably will. We already went out once this week - in public, why tempt fate?

Low key is how we like it, so it will be dinner and hanging out reading or maybe put on the tv. I have two new books that need their binding cracked, and they're not gonna read themselves.........mostly because they're not audiobooks.

As 710 pointed out with this pic, he was the original Howard Wolowitz (sp). 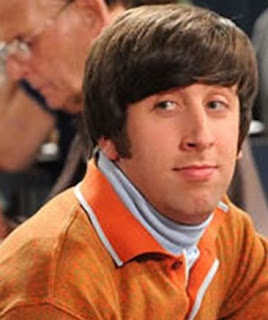 ......but in a drum major marching band outfit.

Happy happy! I bet there are a lot of (us gay) people celebrating ten and eleven around now. Ten years for us in May. We married (in NY) as soon as we could once it was legally recognized.

Happy Anniversary! Love the hair, I didn't have hair like that, when I had hair.