I figured I'd do a monthly 'what I'm listening to' kind of thing. This could be viewed as a lame placeholder kind of post. And probably it is. But it's my blog! So there!
These may or may not be newly released disks. They might not even be a good disk - just what is been in heavy rotation in my car (as usually the iPod is playing anywhere else). 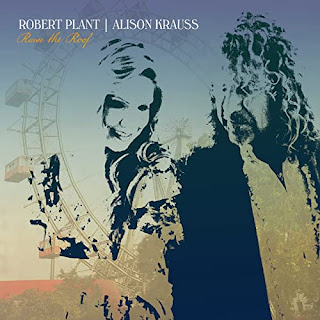 Fourteen years ago, to the month, I reviewed the first album from Robert Plant & Alison Krauss - Raising Sand.

The first release was an unlikely pairing - and it kind of worked, it kind of didn't. I thought it would be better if they harmonized on the songs the other would take lead vocals, but that didn't happen much or producer, T Bone Burnett didn't mix the disk as well as he might have. My opinion of course.

I've always been a Krauss fan, but somewhere, I never developed that Led Zeppelin gene. Sure, I knew Plant's voice and music - mostly due to my age, gender and race. Yes, those demographics are all prominent and necessary in that last sentence.

On the surface Raise the Roof doesn't deviate tons from the first outing. Same producer, many of the same backing musicians and some overlap in songwriters. I do feel Burnett did a much better job on production and the song choices seemed to flow a lot better. There are more blending of the two voices than on Sand, and it all seems less forced.

Both singers have their moments - Plant does no better than "You Led Me to the Wrong". The song itself is good, but he doesn't overdo it there and Krauss' fiddle is as mournful as it's ever been.  Krauss shines on "Trouble with My Lover".

Krauss really doesn't have a bad track here.  Actually, neither does Plant.

I'd say where the album truly shines - and kind of what I expected (read: hoped) initially from Sand - are the two opening songs "Quattro (World Drifts In)" and the Everly Brothers' "the Price of Love" (which is almost unrecognizable from their version - as you'd expect).

I would say the closest likeness this disk has to the first is "Can't Let Go" (which is song Lucinda Williams did back in the '90s, but is NOT a Lucinda Williams song is, no matter what the press writes), and "High and Lonesome" (which is the only original song on this disk).

Oddly, the Target version (do people really go to Target to buy music still that they get a special disk?) has a cover of a Lucinda Williams song from her last disk with "You Can't Rule Me".  I'd love to hear that, but not enough to go to Target or buy a CD.  ....and I haven't found it on-line yet.

So, I was reluctant to buy Raise the Roof, because I was not really impressed by Raising Sand, but Krauss will get me to buy just about anything. I'm glad I did. It's not a perfect disk, but it's solid and not really a bad song amongst them.

I am a Huge Alison Kraus Fan and have loved all the releases from this new album. I love a lot of the new Adele, you are probably not a fan.
But I don’t know that .