a View to a Kill 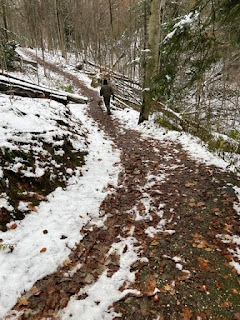 I took off Thursday and Friday for some mental health days.

We had an idea of going down to a state park to relax in a cabin and go hiking. Neither one of us was horribly committed to the idea, and the thought of being in a cabin with snow seemed...........less than ideal.

Yeah, I'm a freeze baby, but the reality is: you can only hike so much in the snow and woods with a dog. And since we didn't plan-plan the trip it seemed a would be bust.

Last time we did this it was nice, but we still didn't plan well with supplies et al, and there ain't much around these parks for which to go for a food run, so we made this partial week a stay-cation.

It was easy and cheap - that's about all I'll say about that. However, we did go hiking each day. Locally - some farther out than others.

But between Thursday and Friday it snowed. Not SNOWED, like meteorologists predicted. Our supposed 5" became less than 0.5".  That made Friday's outing a bit more............well, precarious.

As you all know by now - over the last four years or so, I've become a falls risk.

The trail 710 picked was snowy, muddy and leafy. I just turned to him at the top of the slope we were about to decline and said, "you know, you could just shoot me. No need to James Bond this death with elaborate schemes that never seem to work out in the end for the villain."

At least he laughed. Or knew I was onto his plot.

Still the image is reality. I trailed.......on the trail. I'd say it's illogical, but it's not - any more, I second guess many of our walks. This could be on where, the conditions, my shoes, the weather - or any mix. I won't say I'm afraid of falling (again), but it's burned into my psyche.

Our neighborhood walks are great, but I'm usually on the street while 710 & Dog are on the sidewalks. The slate sidewalks, that out of nowhere can become super slippery. Oh, I've slid and caught myself before the need to tip over. The street is a safer bet.  I can only imagine what the neighbors think we can't be near each other for any host of reasons.

I wasn't grumbling on this hike or anything, but 710 said I should take in the beauty.

I had to tell him, when we walk in the woods on sloppy / slick / muddy days, THIS is my view. 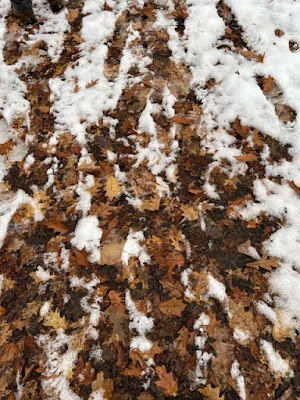 Yup, it's at the ground. Most all of the time.

There might be birds, blue sky and sites to be seen, but that's for when I'm standing still, not when mobile.

Admittedly, it's a horrible annoying way to exist, but I find myself second guessing any way I walk unless it's sunny and dry.......and even then...........sometimes. And it's not like I fall all the time. It's only been four times in four years, but each has been painful and / or expensive. It tends to give one pause.

Clearly, I made it through the hike.

Ironically, when we came out of the woods to where we parked, there was a park ranger and an ambulance, both with their lights on.

That doesn’t sound very promising, but at least your new redone backyard remains more intact and hopefully pristine. My big labrador caught a possum tonight and refused to drop him, so he stayed outside until he got bored, messy , dog is completely vaxxed possum must have lived it disappeared off the deck which I sprayed and scrubbed. I hope your equilibrium improves.Maybe I’m late to the story on this one.

How thoughtful of your husband to have called ahead for your ride.

We recently moved from San Francisco to Santa Fe, NM and, while we haven't had snow yet, I'm prepared for my winter hikes with a pair of Yaktrax. Have you tried these yet?

Do you have enough life insurance to make it worthwhile?

good for you for taking care of yourself with a few days off. I hoped it was helpful.