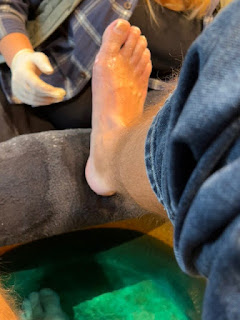 It's cold here all of the sudden. Thursday I was walking at lunch with blue skies and and low 60s.....in November. Today we never got out of the 30s and it was snowing.

I can't really complain. We made it until mid November before it got chilly.

Other November changes - to which I alluded yesterday - I have someone replacing me in my former job. One of them. Well, one job. It's now former. When I took my "new" job 18 months ago, I ended up keeping my other too.

On paper, it is two full time jobs and one salary. In reality, it is one full time job, and one shitty coverage of another, to which I couldn't provide enough time and attention. Still with one salary though.

This last week, I tried to on-board him while doing my full-time job. The latter suffered, as I really do need to get him up and running on the other one.............and to kind of extricate myself from the role. I know it will take weeks to do that, but there there's light at the end of the tunnel.

Yes, I was drinking. And yes, I went across to see if I could make an appointment for sometime over this weekend. But.I wasn't drunk.

Yesterday was my appointment. The new place is smaller, lower keyed than the usual one I had been using. And they are WAY nicer. And about the same price. So, I think I've officially found a new pedicure palace.

Yes, you get a drink with this service, but I didn't take it, as I had a 10:00 appointment. Next time it's at 16:00, so I can start easing my way into drinking into the happy hour, dinnertime and beyond hours.

My new nail / foot technician was nice. She asked some questions to generate some convo, but nothing where it was annoying of that either of were, or needed to be, chatty. Best of all were no massage chairs.

Other places use those and maybe it is just me but they are SO uncomfortable. Granted, I've never had a massage, but I don't believe they movements those chairs make mimic what a human person would do. And I know for a fact the chair won't give me a happy ending.

Email ThisBlogThis!Share to TwitterShare to FacebookShare to Pinterest
Labels: Stuff

I should go do that, the sweet bear does regularly.