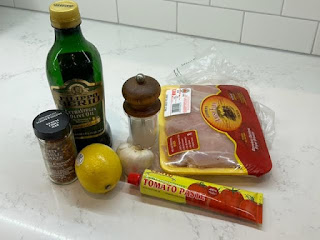 Yet another cooking segment. I'm on a roll. Just mixing it up week by week, trying new stuff because I'm bored with the old.
Maybe it's winter starting to set in and I need new comfort ideas. Chicken is easy enough to make, in almost any form (well, maybe not fried!), but for the most part it needs umph, as it's a little bland on its own.
The recipe is called Spicy Glazed Chicken Breasts.
It is slightly misleading. While I added spice, it didn't come through in this, but when / if there's a next time, I can tweak and do a little better. As Ina would say, you always try out recipes before you serve them to guests................not that we're really having folks over in a pandemic.
So.....here we go...........
Ingredients
4 boneless, skinless chicken breasts (1½ to 2 pounds total)
¼ cup extra-virgin olive oil
¼ cup sliced almonds  *
3 garlic cloves, thinly sliced
Kosher salt
2 tablespoons tomato paste (preferably double concentrate)
½ teaspoon red-pepper flakes
1 tablespoon lemon juice

*Sorry - I don't like the smell or taste of almonds. They had to go. 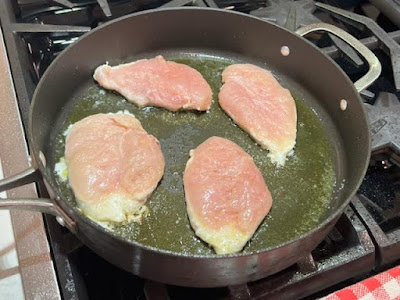 Pat chicken dry and pound to an even ½-inch thickness with a heavy skillet or meat pounder.
In a large (12-inch) skillet, combine the oil, almonds and garlic. Season with salt, then set over high heat. Once the mixture starts to sizzle, reduce heat to medium and cook, swirling occasionally, until light golden, 3 to 5 minutes. Turn off the heat and use a slotted spoon to transfer the almonds and garlic to a paper towel-lined plate. (Keep the oil in the skillet.)
Set the skillet over medium-high. Season the chicken all over with 1 teaspoon salt, then add to the skillet and cook until browned underneath and opaque halfway up the sides, 3 to 5 minutes. Reduce the heat to low and transfer the chicken to a plate, seared side up.
I can't stress the patting dry. We didn't and I think it thwarted the chicken from browning as it should. 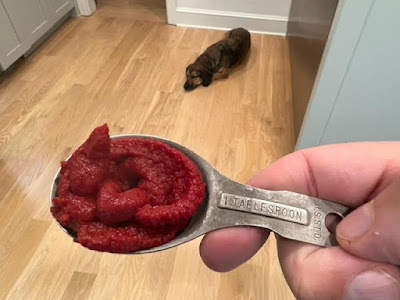 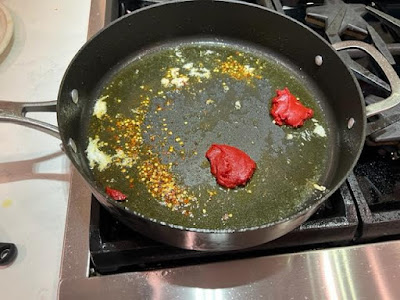 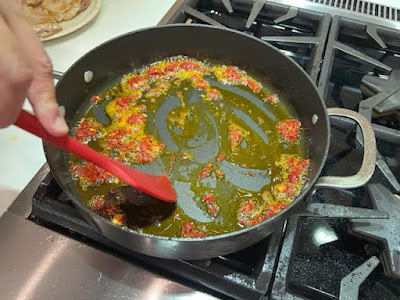 With the skillet still over low heat, add the tomato paste and red-pepper flakes and cook, stirring constantly and scraping up browned bits, until the paste is a shade darker and starts to stick to the skillet, 1 to 2 minutes. 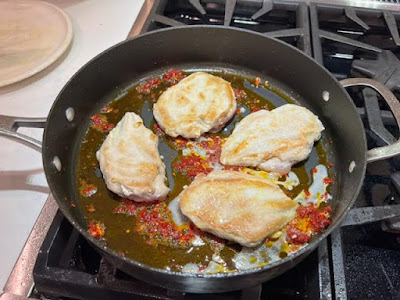 Return the chicken, as well as any accumulated juices, seared side up to the skillet, cover, and cook until the chicken is cooked through, 4 to 6 minutes. (The moisture from the chicken will keep the tomato paste from burning, but if you’re concerned, add a teaspoon of water as a preventative measure.) 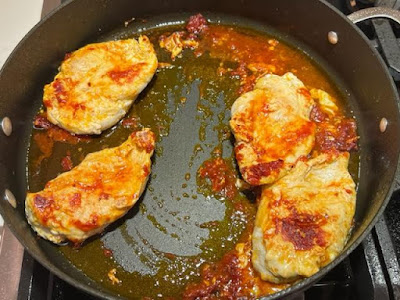 Uncover, add the lemon juice, then flip and drag the chicken through the tomato-lemon glaze to
coat all sides. 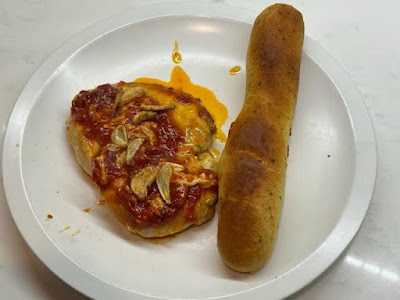 Transfer to plates, spoon over any remaining glaze and sprinkle with the fried almonds and garlic.

Yeah, that last pic doesn't really sell it. The dish wasn't really oily, but that image wouldn't have you believing what I'm saying.

I don't think there was enough red pepper flakes to make it spicy. I'd add more. The garlic on top was a nice touch, but the double concentrate tomato paste honestly made it a lot like chicken parmesan without the cheese.

The recipe is a solid foundation, but I think there is room for improvement. It made for good leftovers.

Nice, and easy to make. That aluminum tablespoon measure looks like the one my mother bought in 1952.

the tablespoon is 710's grandmothers. of course we have new Oxo ones, but i always use these.

I cannot imagine anything with more umami to it than tomato paste.