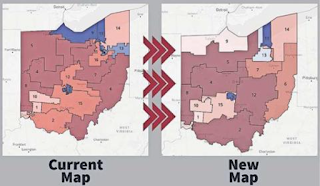 You can dress is up anyway you want to, but in the past decade or so, Ohio is not really a purple state. It's red.

We haven't had a democratic governor since Ted Strickland left office a decade ago. The next democrat was two decades before that.

I couldn't tell you -or find - when (if?) the democrats ever controlled the state house or senate.

But no. That wasn't good enough for the scum suckers in the GOP. Nope.

Not only did the GOP redraw the maps of who represents where - they couldn't even leave what little blue there is (not was........as it's still there) and redraw the lines.

It reeks of impropriety. And naturally, they got away with it.

Sure, there were lawsuits. The judge overseeing those lawsuits?  The son of our republican governor. The same governor who'd have to sign these changes.

......and he did. Partially because the son refused to recuse himself from the case.

I did mention reeking of impropriety, didn't I?

I hate this place.

If state republicans were having a holiday parade, I might drive me SUV through the route at high speed.

I'm a white male. I'll just say I was a medic. Worked for Kyle.

Song by: the Smithereens

The Republicunt in my district ran unopposed last time. We’re fucked, as the Democrats don’t seem to have a long game, and they still make a pretense of ethics.