I, Blobby, won the Emmy contest between Mike and myself.

Oh, no - you didn't miss posts where we made our selections and we, well.....I, wrote scathingly brilliant and funny quips about the categories and the nominees, and who we picked why we picked. 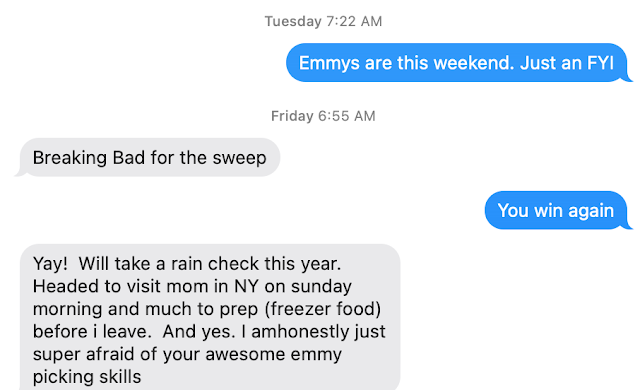 .....and how can I look badly upon a grown "man" who wants to visit his mommy?

I kid, of course. Mike's mom should get a visit from her only son. Even I wouldn't make (more) fun of him for that.

But as you can see above, he pretty much declared me the winner anyways. And if I picked just one winner, I'd take the entire she-bang.  .....and I guessed at least one win when I called it for Gillan Anderson back in January.

710 and I didn't really watch, probably for the same reason Mike and I didn't really play: I knew little (little-er) of what was nominated and even from that, less than I saw or actually knew about. While, of course, we state it's a guessing game - it's actually getting more and more like that every year. I honestly don't know how people keep up with whats on the 800 stations and 57 streaming services.

I've said it before - the reason there are no food workers, are because there are so many shows and roles out there, any actor or actress who'd been waiting tables all have multiple shows in production.

So it was an asterisk year of winning for me. But I'm not a proud man. I'll take it.

Song by: Fall Out Boy

Always glad to see some one with as much longevity, and grace win ,as Jean Smart. She never ceases to amuse me , since Designing Women.