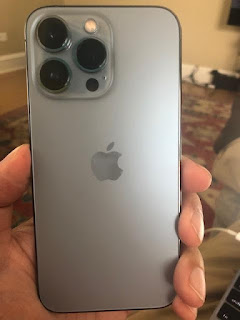 It's new phone time. It was time.

I'm not one to upgrade my phone annually. I've had the iPhone X for like 4-5 years. It's not that I'm not keen on technology, just that when it comes down to it, I'm lazy.

The X was a huge upgrade from my 6 (or was it 7?). The screen was great, the camera better. But by all accounts, the 11 and 12 had much better cameras.

As I've ditched all cameras that are not my phone, as a blogger, it's good to have a good camera. Ironically, you can't take a pic of your new phone with your new phone. So, what you're seeing is the last pic taken with my old phone.

Truth be told, I would have kept the X, but I've had a few small fails with it. The phone itself - worked great with earbuds, through the car bluetooth or on speaker (though I hate people who talk like that). But put up to my ear.....you know......like an actual phone and I could barely make out words................and NO, it's not my hearing.

The second issue was, a few times, the screen just went black. The phone didn't run out of juice or anything, it was still on, just could not see a thing.

710, almost a year before, had much more serious problems. The phone would just come on and start deleting apps automatically. He thought someone was hacking it, but it turns out, it was a thing. The internet said so. He had to upgrade at the beginning of the year with the 12.

Me? I ended up with the 13. Pro.  Not Pro Max, because it's not always about the size. The Pro is the same size as my X, which is fine.

I don't get Apple sometimes. The regular old 13 comes in about seven colours. The Pro - four. And allegedly the one I ordered, in the pic, is Sierra Blue. Does that look blue to you?  and not silver?

The phone arrived on Friday, and I let it sit for a day, as it had been a crappy work week and I didn't feel like *Nsync'ing stuff.

Yesterday, I got, what I think is everything, moved from phone to phone. So far, I've only found one glitch that I can't figger out. The face recognition doesn't work on my MyChart app. Settings all seem fine, but we'll see.

The screen is pretty sweet. I have yet to take a picture, but today is BowWowBeach, so you know it's gonna take a Shep pic or two.

Song by: the Clash

Congratulations on the new phone , hope it works like a charm for you .

Nice, upgrading is a trauma in my future.