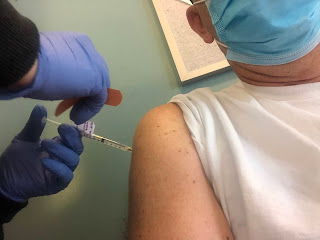 I was a few days away from my eight months since my last Covid vaccine. But me, being the fragile flower that I am - and I am ! - I got my booster shot a few days early.
I have made no secret here about my anxiety to Covid, along with the idea of having to die alone with no one (read: 710) being able to see me or say goodbye.
Though honestly, if it comes down to ICU and intubation, just make me DNR and let me go. The reality of coming back from that isn't all that high.
I felt a bit guilty about getting the shot early - or at all. However, it's not like people who haven't gotten vaccinated at all are clamouring to get their first or second shot. And it's not like toilet paper in April 2020 - there's plenty to go around........because not enough of the country is vaccinated.
You've all read here that we still don't go out and socialize, though we had a couple over last week. Still - no movie, restaurants, we haven't been shopping for things we need for the house, so that furniture we needed 16 months ago, we still need. And when we do go - have masks will travel.
Getting to the vaccination site was just horrible. Traffic in the 216 was worse than I had ever seen. A 20 minute ride took me almost 90. I was late by 17 minutes - and I pride myself for usually being on time.
To add to it all, half-way there, I realized it wasn't at the location at which I assumed. I hit the hyperlinked address and let Apple Maps take over. Silly me. Silly silly me.
I had not noticed on the link it had the address and street. No town. No state. No zip.  Only when I noticed me going into another town, which was past my destination did I go......."huh".  Je looked at my phone and it said I'd reach my destination in 16 HOURS and 2 minutes.  The 2 minute thing didn't bother me nearly as much as going to a different state.  No way was I going to make my appointment time - as I hadn't left over a half day early.
So, some rerouting and yes, 17 minutes late.
The problem working in healthcare and leadership is: people know you. So the site I went to had people to whom I had spoken, emailed or presented to via a webinar. They knew me, though I didn't really know them. That is bothersome to me. Perhaps I should be flattered, but I suspect they know me for a reason - which usually isn't good.
Anyhoo. The shot. Like the other two were quick and easy. It took way longer to put my shirt back on.
The good news?  Save a sore arm, no side effects !!!!
My first Moderna dose was like the third. The second had me sick with fever et al. By most accounts, most booster people have that reaction #2 with the third.
I waited for it. And waited. If the '12 hours after' rule applied, I'd just be waking up from my night time sleep for those effects to show up - yet they never did.  As Spo might say, I was pleased as punch with that. Yet it was a restless night because I kept waking up to see if I was ill.
If I need a booster every eight months or so, so be it.
The boost won't have me going out and doing more things. It's just a layer of protection for me and my family.
Song by: Joseph
Posted by Blobby at 12:07 AM

We finished the process on March 24 but got our Last Pfizer injections March 10. September 24 is the earliest we can pursue a booster. Because my mother turns 90 in March , and because I have a Valid Florida Dental License. We are like you. We go out to the grocery and for dog food at the hardware. And that’s about it. The person who mows my yard had a cold , he said, this week, he’s 40 and I hope he’s right . I had to give him a check , so we stretched as far as possible, but I should have come inside and gotten a mask. I also have vaccinated friends who are on a Cruise , he is an RN and she was my office manager for more than 25 years. After this week I guess I’ll know a lot more about Covid. But Rather than get it and worse get it and give it to my mother. I stay home. I-will gladly get boosters and continue to mask . For as long as it takes.

I, too, will be getting a (Moderna) booster after 8 months, regardless of FDA and/or CDC recommendations, and assuming I'm able to arrange it. I question whether Medicare (I'm 72) or my prescription plan will cover it, but if not I'm more than willing to pay the out of pocket cost. Carol, a reader in Philadelphia

Travel said...
This comment has been removed by the author.
7:37 AM EDT

I will follow your steps, well hopefully not the wrong address step, as soon as I can. My county will start up next week. My Doctor said, GO DO IT, don't wait and if anyone questions your tell them your doctor told you to. She said I will take that call, I'd sooner that call than a call from the hospital asking for your records.

I got my Moderna booster last month- the second shot was pretty rough, just aches and pains, no nausea or vomiting. Cold-like symptoms. Third/booster was worse than second- same symptoms only mor e severe and longer lasting. Glad yours went well.

Good for you!
I hope to get mine this week at my check up.