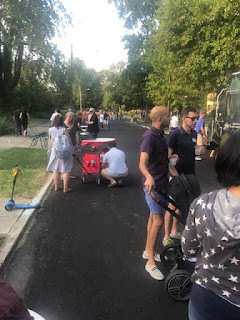 Yesterday was our annual* block party.   ......in our new neighborhood.
Yes, we had them in our old 'hood, but this was our first here. And it was different. And good.
There was no pot luck, like our old place had been. It didn't dawn on me immediately (read: 2 weeks)  that it was due to Covid. Touching and feeling piles of food that multiple people will encounter isn't a good look these days.
So, it was BYOB (and we did) and there was a taco truck -- which only took touchless payment. Ahhhhh.........the new normal.
710 wasn't in the mood to go, but I pushed it a bit. Due to the pandemic, we have met next to no one on our street, let alone the surrounding area. Everyone is either sheltering in place or avoiding us. At least that's my story.
And truthfully, it was a slow start. We finally knew one couple, and our realtor.
Honestly, I had a goal: to meet the other gay couple who lived two streets away. They are younger than us, for sure, and have a gaybie. But we'd seem them as we each walk our respective dogs (and their baby).  I mean, I don't think I was looking to be friends with them, but at least being able to do a chin nod and say  " 'sup " as we passed each other didn't seem beyond the pale.
Oddly, one of them made a point of leaving a group of other folks and coming over to us and introducing themselves. We had a great convo and then his husband joined and it continued. I actually ended up liking both of them a lot -and their baby has an INTENSE stare. Unnerving, actually. But he's cute.
As we got our tacos, we met a couple on our street - who are slightly older than us. Sara(h) was THRILLED to meet someone else. She was hoping for a more community feel to the street and didn't think it was there. She and her husband invited us to sit with them and eat.  And it was nice. We plan to at least sit outside for drinks soon.
And we met our brand new neighbors from two doors down. They just moved in. They seemed great too. Loved the husband. He's funny, so we'll be fine.
Oh - and we thought we met the person who sent out the email for the event. But as it turns out Taylor wasn't the guy who sent out notice. It was his wife..........Taylor.   Yes. They are both named Taylor. Now when they call out names during sex, it might just be a bit narcissistic and could possibly not be even directed to their partner.   .....and the opening of mail could be a challenge.
So, our planned 30 minutes in-and-out turned to two hours. ....and we came away with some potential new friends but at least with names of neighbors on the street. ...and the neighboring streets.  I'm happy we went. I think 710 is too.
*no block party happened in 2020 due to Covid.
Song by: Arcade Fire
Posted by Blobby at 12:07 AM

I couldn’t be more happy for you, I’m glad the Gaybie isn’t yours. I have neighbors now that are twenty years younger than me and twenty years older. I don’t think I will ever have great friends , but I have good friends. The last time 911 was called here by a neighbor, 11 people came out to met the EMTs and ask the spouse of the person if they could help. I think the Taco Truck is Beyond Brilliant. It seems now that maybe your roots are starting to spread, that is a wonderful thing.

Your description of the two Taylors is fun,

Our first "neighborhood" event is later this week. I am not really thrilled about going. So many of the people who have moved in are way young than we are, have small children, and are very "clannish" in a heterosexual way. They like gay people, they just don't want gay people in their events. But this is not my forever home, I know that, and they know it too.

Good for you for going!
I am envious; we haven't had a cohesive neighborhood in years.
The folks across the street have an annual potluck on Halloween and we are not invited.