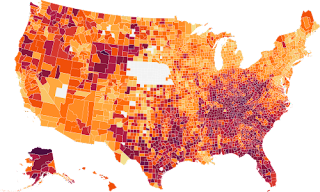 First off - what the hell is Nebraska doing right?

This map - as of yesterday - showed all the Covid hot spots in the U.S.

It's not the one county area Nevada has goin' on. It's almost the whole frickin' state.

Either zero people live there, or they've all gotten the vaccine or got their hands on some primo horse dewormer. Either way - good for them. I guess.

We've all been making fun of Florida - and you know, usually, rightfully so. But fuuuuck. Tennessee - you are all sucky as hell. Kenfucky - you get exactly what you deserve with the leadership you keep re-electing. I have zerrrrro sympathy for any of you.

As much as the alt right is going to burn this country down in flames - Pappy Joe isn't wrong about the vaccination mandate.

Make no mistake - the right WILL burn this country down with that mandate too.

This will force the two of the three major hospital systems in the CLE to make sure their workers are immunized. The third one has already required this.  The two others were afraid staff (read: nurses) would leave - and they still might, but they'll have much fewer place in which they can be employed elsewhere.

It would be nice if any of this happened, or enough so that it could make a difference in the severity of the illness to give some relief to this current way of life. I see ironic anti-vaxx'ing lawsuits from the same group that are proponents of 'right to life'.

I have said it before, if these guys want to fight it and keep dying, I'm ok with it.  ....but the response is not going to be pretty.

Oh - and this Pappy Joe proclamation totally diverts his Afghanistan fuck up.