Is That All There Is ? 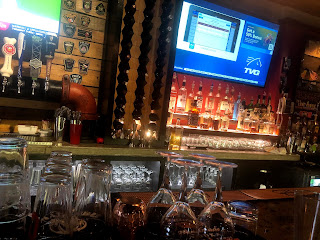 There is a scene in Martin Scorsese's wonderful After Hours (1985!), where Griffin Dunne, while in a bar, uses his last quarter to play Peggy Lee's, "Is That All There Is?".
I tried re-enacting that about five years later while sitting in Houston's allegedly oldest bar, La Carafe. I sat there and put coins (!) in a juke box and played the same song. It seemed so fitting.
Poor Rebecca. Trying to impress two semi-alcoholic, but fully gay, men. Imagine our surprise (and her dismay) when we found out the Beer Can House was not a bar.
My lord, that trip. Most of it not even suitable for this blog. That we remain friends is a testament to friendship itself. And somewhere Jon has the best picture of that trip (possibly of our lives) - and he wasn't even on it.
It's fun to skip down memory lane on a Thursday evening, when you're been out after-work-drinking. It's odd - on so many levels.
A. Drinking during the week.  Yes, that is no longer me.  Or at least rarely.
B. Out. At a bar.   ...........during Covid.
That booster must have made me think I was invincible. We can't afford to be innocent!  Yet, here I was, with a guy (straight!) who used to work for me, who was needing some mentorship. He's adorable and young-ish. Still not quite sure what he wants to do with his life / career. Normally, I'd say he's a little too old for that conversation, but to this day I still have it with myself now and again.
I stopped at three beers - some kind of local red-ish one - though it was eerie how easily they were all going down.
The place was nice. Totally rehabbed and in our Little Italy area. We sat at the bar, which I haven't done in ever so long. There was a juke box, but an electronic-y, touch screen kind of thing. Normally, I'd be all over it, forcing my music choices on the unsuspecting, but I'm not sure it had a song past Sammy Davis Jr's "Candyman", which was playing when we arrived.
Looking down the bar, I'd say everyone was 20 years older than I, and 40 older than Bryan. The super sad thing was, they were probably my age. I back storied the entire thing, as I am apt to do. At one point this was a dive bar they all used to frequent, and someone fixed it up, but they still come here. All seemed very down on their luck.
One guy walked in and the bartendress said, "we're out of PBR" and he just turned around and left.
Frank Sinatra played here and there. Johnny Cash's cover of  Nine Inch Nail's "Hurt" wafted through too (so I guess that's newer than SDJr).  ......but then came on Miss Peggy Lee.
I'm 99% sure Bryan never heard the song, or even knows who Peggy Lee is.  Or was. Nor did I even try to educate him. Little scenes of After Hours and Houston played in my head.  It made me smile, not just in my head, but on my face.
....and not just because I was feeling the effects of the alcohol.  Maybe partially, but not fully.
Maybe next time, I'll take over the jukebox.
Song by: Peggy Lee
Posted by Blobby at 12:07 AM

A fun ramble. We are becoming that old guy, it is too late to die young.

What? What are they doing listening to that music?
Sinatra and Johny Cash? Get out of here, get out right away.

Here i live in innocence. My only hope is in my people. I was thinking that we are still creating music.

You just wrote the most beautiful heart rendering story I have read in a long time. I felt I was right beside you having the local red-ish beer. Thanks