While I haven't been thwarted in my goal-quest for 2021 movies, television does sideline me.
I've lamented a bit before about so many things being on tv, yet so few of them to watch. Or want to watch.  Or what to watch.
We all have friends who refer us to programs. Far too many - programs, not friends - to even consider watching. And then of course one's particular tasted must be considered along with which of the streaming services one has.
I, for one, aren't going to watch the gory stuff, and I'm not a fan of the zombie, witch, occult, vampire, paranormal, dragon genre as most seem to be.
So - since I'm not writing much about politics (hopefully), perhaps I'll do an on-going series on what is on TV.
the Crown - season 4
I'm underwhelmed.
Oh, Individually, I think the main characters are good at their craft. As the stories go, or the telling of them. Meh.  Perhaps it is because I have lived through this era of this monarchy and seen so much in the papers and television have repeated so much of this over the years that it's nothing new. 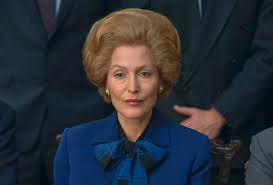 That said, Gillian Anderson as Thatcher is something to see. She is great, even if the woman she is portraying is not. I don't know why they just don't hand her the Emmy now.
I have grown to like the guy who plays Philip. Charles has his moments, as does Anne.  The other Windsor boys are just not good. Colman is quite good, but two years of her is fine.  I love Helena Bonham Carter, but this is a role with which she does almost nothing.
Then there is Diana. She's not bad - and bares a resemblance. But yikes - it's painful to watch on multiple levels. And as I've said, we've seen it happen already. At least with Claire Foy's portion - all of that was well before my time.
I find the best episodes not to be about the royals. I think the one about the guy breaking into Buckingham Palace - twice ! - was one of the more interesting ones.
I guess will about season 5 and 6. I mean - Delores Umbridge as the Queen?
You can catch-up with the entire season in a little over two minutes. Honestly, save for the Bonham Carter one, the impressions are fairly spot on.
Posted by Blobby at 12:07 AM

God Save the Queen!

Not my thing. Will probably never watch it, although Gillian is always a draw for me. Helen, too. Very intrigued by Gillian as Thatcher. Nice bit of casting. I've never seen the Streep bio film... I wonder how they compare. My hunch is Gillian bests Streep. I watch one episode of Blythe Manor or whatever it is called. On Sunday. Otherwise, the news and Judge Judy is the only thing that interests me... and Judge Judy only because it is what my Mom watches while we have coffee each day at 4:00 pm. Have a lovely weekend.

I haven't watched tv since 1999, when MST3K left the airwaves.
the idiot box holds no meaning for me.
nothing but vapid, inane, stupid, uneducated twaddle on tv.
I like finding history/travel videos on youtube and watching those.