the Price You Pay 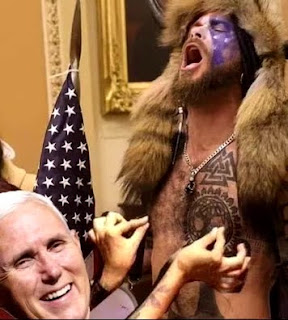 What is the price for insurrection?
Honestly, I think that's still being calculated and fortunately, it's not all being tabulated monetarily. There is human capital involved too.
For the politicians, while some were just (re)seated, I think they'll find their near (and hopefully far) future to be bleak. And uncomfortable.
Here's hoping that Cruz & Co do get expelled from the Senate. That would mean the fucking world to me. Unfortunately, they won't lose their clout in the outside real world. Hateful people will hire them in some fashion. It's sad.
I'm loving Coke, Marriott, Dow, Morgan Stanley, AT&T, Airbnb, and Hallmark are "suspending" donations to any candidate to voted for overturning the election. Hallmark - and their wonderful wonderful tv movies - went a step further and want their donations back from Josh Hawley and Roger Marshall both from Missouri. I love it.
BLOTUS himself, well, his golf course, is losing a PGA championship game - and the ability to ever host another tournament at any of his courses. There is the high probability that he'll lose "his" Washington DC hotel.
And of course, Deutsche Bank, who has $300 million in loans to the fat fuck & family, are now being investigated into their lending habits and the two folks in charge of said loans have resigned from the bank. Yeahhhhhh...................nothing to see there.
Then there are the perpetrators at the Capitol.  ...including at least two police officers who are now under investigation for assisting the protesters. And I'm sorry - it has to be more than two. Just the video of them standing in front of doors that people were reaching over them and punching out the glass......while they did or said nothing.   Nothing.  It can't be about not wanting to antagonize said protestors, as they clearly already were.
But of course I'm glad for all those losing their jobs. I love the ex-wives and ex-girlfriends turning these motherfuckers in. I mean, if you end a relationship badly, c'mon guys, someone's gonna fuck with you if you fucked with them. On the other hand, you weren't too bright in the first place, so clearly you couldn't know this.
Then there is the fucking cry-baby who found out he was put on a no-fly list and is deemed a terrorist. One who cries, but not at the killing of a police officer - beaten to death with a fire extinguisher and ironically an American flag - but because he can't get back to Buttfuck, IA on Spirit airline.
And at least GoFundMe has refused to host people wanting to raise $$$$ for travel expenses to DC for this domestic terrorism event.
Then......then there is the personal toll.
Blobby fired up his Blobby1 Twitter account which had pretty much been dormant since 2013 - and I just started jabbing the likes of Cruz, Don Jr., Susan Collins, Ladybugs Graham and others.
Like BLOTUS himself, Blobby found himself banned from the platform in just two days. Fuck that - they gave the gasbag years upon years to do his dirty work. 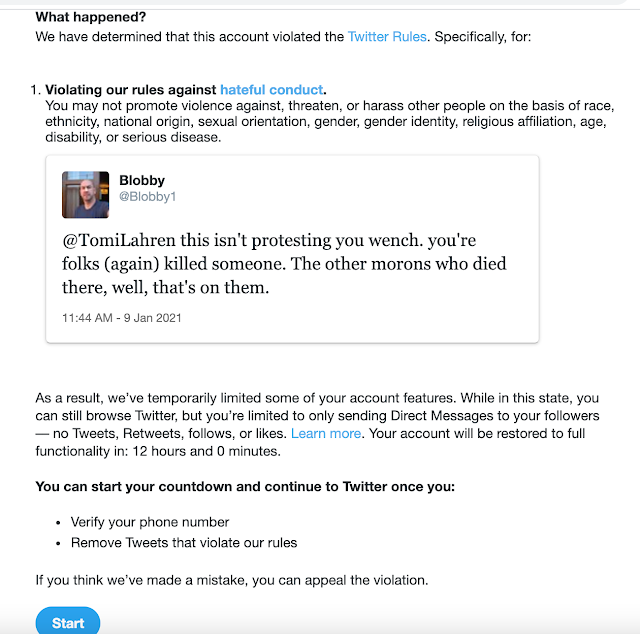 TwatTami said the Republicans had "one bad day".  And I didn't even really lose it. I could have.  Twitter's auto readers - I'm guessing - saw the word "killed" and banned me. I didn't threaten her. I accused her.
Of course, maybe it was the 'wench' comment. I mean, I knew 'cunt' would get me banned. But she is.
I didn't even appeal.
Song by: Bruce Springsteen
Posted by Blobby at 12:07 AM

I'm pretty sure you were suspended for mixing up "you're" and "your".

8 Days - repercussions everywhere, hiding and watching how deep a hole they can dig, and handing them a larger shovel!

the seditious house and senate members were in on the invasion.

I can't wait for Rudy the brown-nosed, to explain what exactly he meant when he urged the crowd towards 'trial by combat'. Wriggle wriggle.

Sorry you got banned, temporarily. Unfair. But, hey... you're no snowflake. :) Love the graphic. Perfect. Buff-O-Low Boy is refusing to eat food in jail because it's not organic. Cry me a river...