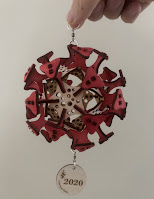 *
What can I say?  2020.
Shit. Show.
That might be the understatement of the century - this one, that is.
At least 80% of last year was a crap-fest.  It would be tough to say that it was all bleak, but overall, these last 366 days were kind of crappy.  And honestly, it was just two items (for the most part):  Covid and THE election.
There was much of these two that were intertwined.
And honestly we have to put in George Floyd and BLM. While those aren't Covid related, they have and had political implications.
I have to believe other stuff happened - or was supposed to that didn't. But either way, it's hard to think those things or non-things were Covid related.
Even something as "simple" as moving. By the time we needed to, social distancing was in place. Some delivery folks would not come into a house - so a newly delivered washer and dryer to the unattached garage was less than helpful. While I never thought I'd move ourselves again, the majority was done by us in a day. The super big stuff we got movers who would come into the house.
This year has really messed with friendships. So many of our friends probably still exist, but we just don't see anyone, let alone do anything with them. That is mostly Covid-related.
Some of that, obvi, is election-related. As if that last four years weren't a testing ground, 2020 became a battlefield. I am not ashamed in the slightest to say I've "let people go" via social media due to the support of BLOTUS or their Covid-denying ways. I'm certainly not true-north in the morals game, but if I think you have none yourself - then well......wow.
I am curious how / if these relationships recover from a year of people doing their own thing. The Covid one. The election stuff, there is NO coming back from.
Speaking of recovery - I don't believe in my lifetime the fracture that BLOTUS & Co exposed (and helped fuel) will ever be repaired. We, as a nation, took 4-5 years to undo a few centuries of work and growth. Or alleged growth. Maybe it was never there and just masked this whole time. But it's gone. Ripped away.
So 2020 - you won't be thought of fondly, if you're thought of at all.  I am smart enough not to have any aspirations for 2021. Certainly no resolutions. I feel I can't be disappointed should things not turn out. I do believe they won't be worse, but I've been wrong before.
And on THAT cheery note...............
As always, you know (?) I break down the blog year by the numbers.  With the new Blogger format to which users were forced to switch seemingly has some better analytics, though I'm still skeptical.  So, like Kai Ryssdal might say, "let's do the numbers...." 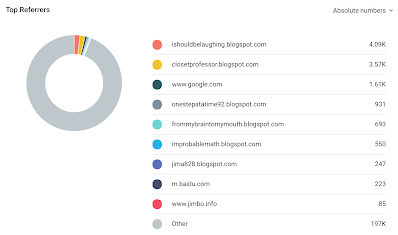 Should I be concerned that at least three of these are inactive blogs? I mean, it's great they still have traffic and I'm the beneficiary of it. Still most of this comes from "other" whatever that is. But thanks for those who are helping me with my best year.
Viewing Audience Top Five Countries is vastly different. Hong Kong is new. I suspect bots, which explains at 40% reader increase. 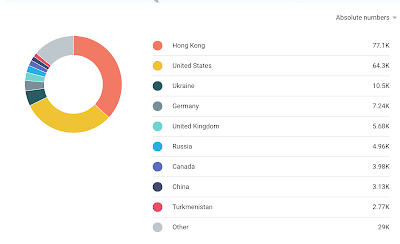 Another physical year in the books.  Sure, 2020 lasted 27 months, but it's over. Onward.  Maybe not upward, but even linear travel is still someplace better than this.
*this is the ornament I got 710 for the holidays. It will be an annual reminder to not forget the past. And, that said, it's very much a nice work of art.
Song by: the Replacements
Posted by Blobby at 12:07 AM

Happy 2021, Loved reading the summary of the year. It was a hard year with big losses and gains. This year will be better after January 6 smoke and mirrors and January 20! Let’s just keep what optimism we have left rolling! I have great plans for the year, hope it can keep up!

Happy New Year to you all hopefully it will be better than last year.

Happy New Year Blobby! May 2021 bring us even brighter light at the end of this tunnel.

that "chick's tits" spammer hit every damn one of my blog friends. hope he got COVID and died.

HNY to all at your house; may 2021 bring us better news and forward progress.

That ornament is cool! For god's sake, don't post it on social media...you don't want to end up like Jennifer Aniston!

Hope you are having a lovely New Year Day ❣️

I love reading this sort of stuff.

Happy new year yes may 2021 be better for you/yours and all of us,