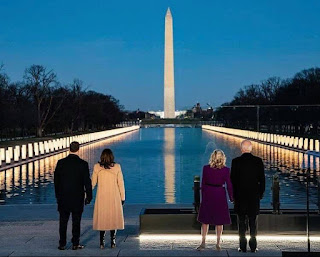 I watched none of it.

My stomach was in knots, my anxiety level barely contained.

I'm no fan of Pappy Joe, but BLOTUS (I mean, he still is the Biggest Liar, so......the title stays) is vindictive and temperamental so there was a whole day of waiting and wondering what he might do - up to, and including, having Air Force One crash into the Capitol dome.

I'm not thrilled with Steve Bannon's pardon, but not surprised. Well, maybe a little. They had such vile words for each other, all I can suspect it that Bannon has a bunch of shit on BLOTUS. Ya kinda gotta wonder what 'Lil Wayne knows too.

And IF BLOTUS truly left a letter for Pappy Joe (which I'm not sure I believe at all) and was 'generous' as told, it's the opening salvo of a 'please don't come after me' plea. Ditto with his not heinous send off about the new administration. It's a little too late to be building bridges.

Of course, the other anxiety provoking measures were Proud Boys, White Boys....and worse, White Realtors. Clarification: White Women Realtors.  And any of those with shoulder mounted missile launchers.

I mean, you gather every ranking Democrat in one place - and #moscowmitch (who they now see as an enemy) and well.........it spelled easy pickings. That all worried me more than Ivanka getting off by daddy's hand.............and you can take that anyway you fucking please.

That said, I was happy with Pappy Joe and his getting right to work. Not that you'll remember, but it was my suggestion months ago that he should forgo all the hoo-ha and just sign 13,091 executive orders undoing anything the previous administration had put their dirty, slimy fingers on.

And for the first time in forever, I watched a press conference.

Jen Psaki wasn't perfect - and she had a few missteps, but nothing major. She's not Sarah Fuckabee, Sean Spice or that last one - the white tramp. I was able to sit through the entire thing - which by the way, is the first time there was a press briefing on an inauguration day. She stressed transparency while also giving slight, but professional, jabs to BLOTUS & Co.

All seemed quiet on the western front. I'm sure it wasn't, but what little I saw of the press, I didn't see coverage of bunches of Karens and Chads complaining about shit.....with guns. But I don't expect Joe's words of inclusion bringing folks together - however, he should have stopped saying "those of you who didn't support me" or "opposed me", I felt just it kept the divisiveness going. Not that this speech was truly going to heal wounds, but still........

Here's hoping Pappy Joe keeps doing the right things. I hate to see Executive Orders be the way of the land, but since BLOTUS ruined this country with them, it seems ok to at least use them to stop the reckoning.

Of course, Joe has one more things to do - and only he has that power:  cut off BLOTUS intelligence access. Traditionally, former presidents get it as a courtesy.  Fuck tradition, in this case. And fuck it hard!

Shame that this did not bring you great joy, as it did myself and my almost 89 year old mother. I and my 2 best friends texted all day. The press conference was stellar, adults telling the truth. I’m set , all his predecessors are looking old but Barack and Michelle. He is (Joe) my hero because he won and my 2800 dollars got spent! 🇺🇸. Oh, did I tell you about the fireworks and the Covid Memorial!

I thought I was the only one who worried the outgoing president would manage to start a nuclear war during his last 24 hours in office. Or that a sniper would somehow manage to assassinate our new President and VP. I think it will take a while for my sense of impending doom to abate. Perhaps getting vaccinated for Covid, whenever that happens, will bring the sense of relief I still haven't found. A reader in Philadelphia

The orange ogre was the McDonald's of lies - 30,573 served! I won't sleep well until he's behind bars. If Joe is serious about healing - the outgoing douchebag needs to be impeached. I liked Joe's speech. J-Lo surprised me, too. It was lovely. It was a little boring and exactly what we used to expect. All those pardons? Garbage. I'm just glad his reign of terror is over.

yesterday was a great day. today we get down to business. and FUCK the dumptards and their feelings!