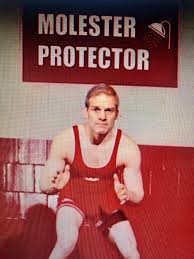 You know, I was gonna write about Georgia, their election and the fucking attempted presidential hijacking of a two month old election.
Here's what I don't get about that. Georgia has 16 electoral votes. Even IF BLOTUS got them back, 306-16 = more than the 2 fucking 70 needed for Biden STILL to win. So what is the fucking end game here?  BLOTUS locks up the KKK south completely?  Trust me, he's got that in the bag.
And there's not much I can do about the senate race there either. I mean, of course I want those two Dems to win, not just for the control of the house, but for those two racist loving motherfucking opportunists to have to rely on their own hundreds of millions of dollars for a living.
So no, not today Santa.....not today.
Well kind of today - since I just wrote about both those things.
Then I stumbled upon a WaPo article about BLOTUS - alleged rapist and friend to many many pedophiles - bestowing a fucking Medal of Freedom to Jim Fucking Jordan - known for helping protect a probable rapist and definite pedophile.
Rape begets rape............which begets a medal.  And apparently 'freedom' means other things than being free, as Jordan is where he is due to Republican gerrymandering, and two puckered lips on the anus of one orange president.
Jordan rolled around on matts in a singlet with other dudes trying to hide his semi. He probably didn't even try to hide it. That's not freedom.  He wasn't in the military - so that wasn't either.  Save for sedition, which somehow he thinks is freedom when he does it, but can guarantee he doesn't think it is if a democrat attempts it - so, he gets a medal.
This random tweet says it all.

I'll even give Daniels this:  doubtful she sucked his dick. Someone would have to be there to lift up his belly to get to his small peen.  I'm sure Jordan found a way.  The team doctor and hours of deposition I'm sure showed the best way to swallow.
Song by: Sublime
Posted by Blobby at 12:07 AM

jordan should be IN JAIL! and the "medal of freedom" is now so tarnished it should be discontinued.

These are just the last vestiges of chaos caused by a dying mad dog. Someone who doesn’t know good, but knows dishonesty and how to exploit it for utmost effect. Jordan or Nunes hasn’t earned a medal of freedom, they have just played into Trumps twisted mind as another way to rile the base as his death spiral reaches it’s inevitable end. Distract and steal , modus operandi , his whole life. Wednesday the sixth, no matter the number of hours it takes , Nancy Pelosi and the House of Representatives and McConnell and the Sane(R) Senate members joined to Democratic Senators, will put the Electoral stake through his heart and Biden will rise Triumphant. A messy conclusion to an absolute worthless piece of human garbage allowed to grow and wreak havoc for 48 months . The cancer will be dead and American people will heal, hopefully never to forget what we have survived!

I really don't think Trump has a strong sense of an end game, here or anywhere. He simply cannot accept defeat, and so he fights on, not the good fight, but the pathetic and delisional battle of a man doing more harm than good, both to himself and others.

Jim Jordan AND David Nunes... Nunes got a medal, too. F the orange ogre, man. He has zero class. The biggest azz wipe since Reagan. I hope they all get what's coming to them.

I've always thought _____was nuts, but now we know he is clearly mad.