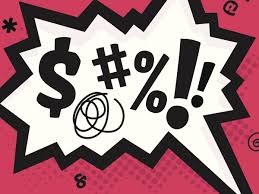 It seems I'm intelligent.  Possibly honest.
With all my surgeries - I have a high pain tolerance.  I'm creative - though this blog might dispute that completely!
I am not a physical fighter and, I speak the universal language.
No.......not the language of l'amour.
I swear.
A. Lot.
According to CNN - and aren't they the bastion of knowledge? - my language choices, as potty-mouthed as they may be, can make me all those things above.
I think we all know George Carlin's (and the FCC's) "seven dirty words". But according to Mr. Krabs - and isn't he the bastion of knowledge?  - he claims there are 13. And he'd know, as he was a sailor.
Upon hearing SpongeBob and Patrick's language, Mr. Krabs threatened them with 40 lashes. 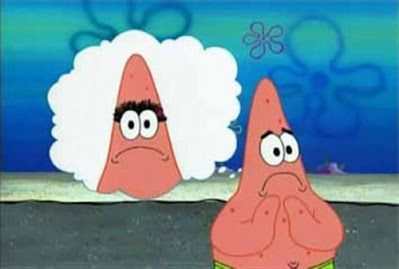 Actually, if you have an opportunity to watch the SpongeBob episode "Sailor Mouth", I truly highly recommend it. A. it's HILARIOUS.  B. think about being a grown up and watching it with kids.  Sure sure........most the bad words are dolphin noises, but as it turns out, I bet you all speak fluent dolphin.
So think about it - I might be the smartest most creative person you know.  Honest.
Song by: Reel Big Fish
Posted by Blobby at 12:07 AM

Email ThisBlogThis!Share to TwitterShare to FacebookShare to Pinterest
Labels: Language

I would love to have you write a paragraph with all of them in it! I need some refresher words , some of mine are stale and ineffective after these last four years!

Adore SpongeBob... though a little goes a long way. More than one episode and the inside of my skull stars itching. I swear all the time, now. When I was a teen, never. I wish I had... some of those words are quite powerful and would have served me well when it came to dealing with bullies and the like. Now, they spew out of my mouth when frustrated. Or when talking about Repulsivecans. Oh, and I read somewhere (THE INTERNET!) that swearing is a sign of intelligence. Hmmm. Not sure.

Since I Raised Grandchildren I was introduced to Sponge Bob and it's on still a lot of the time when the 15 Year Old Grandchild {Youngest and now Only Child at Home still being Raised}, has control of the remote. It's Colorful, I do wonder what Drugs the Creator of it was on? I once tried to clean up my profanity but I failed miserably and didn't last long... old habits die hard and some words just express myself better when they're Blue and Vulgar especially how I felt about this last Administration and the Fresh New Hell they put us thru every fucking day for the time they were in the WH.

"The History of Swear Words" on Netflix is really good. Each half-hour episode tackles a different swear word (Fuck; Shit: Bitch, etc.). Hosted by Nicholas Cage, they delve in to origins, usage, and cultural impact with etymologists, historians, and comedians.

A comedian (forgot her name) on the "Bitch" episode: "I have a female dog. She's a bitch. But I don't call her a bitch. (comedic pause) I call her a cunt."

I second james; we need new words after wearing out the old ones! teach us some new ones!

I've gotten better about my mouth. My youngest daughter was once in the back seat and a car ran a red light. We were quite nearly hit. Scared me so badly that I swore. I dragged out the the big guns and used a word that I never usually use. The following week, my then husband was ranting at me about something. He always seemed to find something to get upset about on the way to church. Out of the blue, a blond curly headed moppet from the back seat said, in the sweetest voice you ever heard in your life, "Mommy? Is daddy being a __________?" He was outraged. To my credit, I did not answer my daughter by saying, "Yes, my smart little girl, yes he is!"