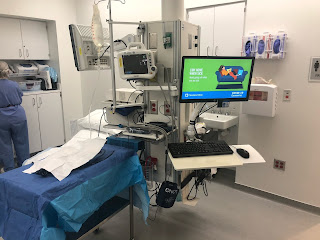 It was really about inner-beauty.

The inside of my peen that is.  Peen to the bladder and then the kidneys.

After a regular doctor's appointment last October, my standard urinalysis showed microscopic amounts of blood in my pee.  Like 0.1 micro-somethings over the normal limit. Nothing visible.

But so did the repeat test a week later. So my doc insisted on a visit to the urologist. Bother.

That visit was ok, and I liked the doc a lot, though he told me about needing a cystectomy...........or a scope through your pee hole. UGH.

I was none too thrilled at this idea and told him so - and he refused valium ahead of time....though I was only semi-joking about that. He showed me the scope and said, "see...........it's not that big".  My reply? "It's still bigger than the entry!".

Oh - how we laughed.

I resisted the I'm sure oft used line: "...not even dinner and a movie first?".  My friends will be happy to tell you, i've done a lot more for a lot less.

I said we'd have to hold off until after my nasal surgery, as that took priority. It seem my time was up two days ago.

I tried not to fret about it, but - {shudder} - fret I did. But I went by myself. On purpose. I told no one. Literally. 710 included. I didn't want to talk about it, or think about it. Or fuss more than I was internally.

I was told I wouldn't feel a thing. That was a great big fat lie.

Well, first off, I assumed it would be the doc putting in the scope, not "Gladys", the 79 year old nurse who probably came out of retirement due to Covid staffing issues. I was wrong. It was Gladys.

Due to this, I got to hear Gladys' tales of identity theft ("she got off easy this time, but if there's a next time she goes to jail!") or the first dog she got, as her grandmother keeled over and they found the dog lying next to the body. She also berated me for not getting my CT scan done - not that anyone had told me to get one. Not that anyone had actually put an order in for me to get one. Somehow I'm the one to take the brunt of this. None of this was doing anything but putting annoyance on top of anxiety.

Then the {finally} doc came in - and the bi-directional comedy show began.

As any medical professional is now required to do - after confirming your name and date of birth, they ask YOU what they're to be doing today. So I says to him I says: "you're scoping my peeper".  He corrected me: "Pecker Checker".   He laughed. I laughed. Gladys groaned disapprovingly.

I was none too thrilled with Gladys' insertion of the scope before Doc Lee came in, but I assume that would be the worst. It was not. Was their severe pain?  No, there was not. Was there weird uncomfortability? Yes.  Yes there was.  We both acknowledged it.

We somehow talked about urology and I said his choice of profession was on him. He could have been a podiatrist. And he went "ewwww.....feet!".  My retort: ".....said the man holding my schwing schwong".  He laughed. I laughed. Gladys?  Not so much.

Then came the scope itself. I got to watch. It was like spelunking, looking for 12 boys stranded in cave in Thailand. Gladys said asked if more KY was needed. Dr. Lee was all - "as much KY as he wants!"

I raised an eyebrow and he just chuckled. If nothing else, he was all the way in, how and where were they going to apply this so-called unlimited supply of lube?

Then to test the kidneys to see if blood shot out of them, they had to apply water. So he told Gladys to squeeze a full bag of saline.......and then harder.  He looked over and goes, "no worries - not your bag".  Gladys was not amused. Blobby was.

If nothing else, it was a decent distraction from having a tube snaking through my snake.

Preliminary good news: no seen sources of blood. I don't think the CT will show anything further up, but I suppose, at my advanced age, it's better to be safe than sorry. My father battled some tumors on his bladder, so my history indicates this as a possibility.

I got through it. No drugs. Just a two drink minimum show.  ....though I told him we should really write a sitcom.

I’m sure the last thing you thought about and the first thing I thought about -was he handsome and were his hands warm. He seemed to have a bright attitude. I tell all my doctors , that I am gay so they will know they are dealing with possible deadly weapons be it penis or prostate. It’s fun. My father had a lot of cystoscopic rechecks after bladder cancer removal. He never said he enjoyed any of them . I especially liked the part where you said” I’ve done a whole lot more for a whole lot less” , maybe not out loud. Haven’t we all. If you have PTSD maybe Dr Spo can help. Be well Blobby and take care of your peeper!

Good to hear you survived, good to hear you didn't enjoy it, there are men who go way out of their way for experiences like that, the second act of the sitcom.

"pecker checker" - bwhahahaha! some broads are real prudes. good to hear no issues though. please update us on your nose progress.

what an ordeal
at least you got a good blog entry out of it; it was good reading.